It wasn’t that long ago that the experts were predicting an "epidemic" of carpal tunnel syndrome among computer users, brought on by excessive typing on the standard, ubiquitous QWERTY keyboard. Yet like so many other doomsday-scenario predictions, this one didn't happen–nor will it, in this case.

Why not? Largely because that standard keyboard is being relegated to a smaller, limited set of user input roles, such as basic typing and data entry, while smartphones, tablets, ATMs, point of sale units and even PCs in many applications have gone the touch-screen route.

The growth of touch-screen-based user input is being driven not only by a wide variety of end products but also their intended usage. For tablets and smartphones, it offers convenient browsing and access to the web, as well as conventional "typing" (although perhaps not as easily as with the QWERTY keyboard). For specialized functions such as ATMs and point-of-sale systems, it allows the software to dynamically configure the screen image to match user inputs and responses, providing flexibility on color, size, shape, and appearance of user interface. It does this while avoiding the limitations of hard-wired, single-function switches which are labeled for a specific role. Further, the flat-panel screen is easier to keep clean and sealed against moisture and dirt than a keyboard (although sealed keyboards are available at significant cost).

According to a recent IHS report "Capacitive Touch Controller IC Market to Grow at Double-digit CAGR Until 2017", the capacitive touch-controller IC market will reach $2.8 billion in 2017, an increase of nearly 50 percent from $1.9 billion in 2013, for a compound annual growth rate (CAGR) of just over 10 percent, as shown in Figure 1. 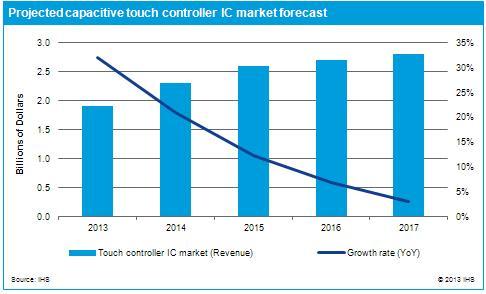 Vendors who can provide cost-effective controllers will see big opportunities, as report author Seung-kyu Richard Son, senior analyst at IHS Technology, notes: "until 2011, U.S. companies Atmel, Synaptics, Cypress and Broadcom dominated the market. But as the demand for smartphones and tablet PCs soared, Asian companies, including Melfas from South Korea, and FocalTech, Goodix and Mstar from China and Taiwan, are actively entering the touch -controller IC market with enhanced skills and price competitiveness… [they also] have better relations with the local smartphone and tablet computer manufacturing infrastructure ..." as shown in Figure 2. 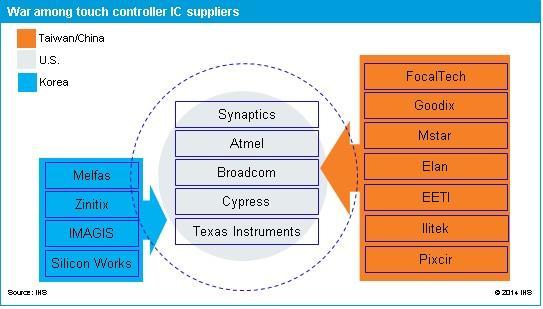 Battle of the touchscreen technologies

As with most other technologies, there is no single best touchscreen technology among the dozen or more major techniques and their variations which can be used to implement a touchscreen. Each approach has tradeoffs in performance, sensitivity, single versus multitouch sensing, complexity of electronics and algorithms, and cost.

For IC vendors, the touch-screen controller is what counts, rather than the screens themselves. Unlike QWERTY keyboards, which have discrete contact-switch closures and thus a relatively trivial interface challenge, the touchscreen interface has analog signal and algorithm subtleties which make it a much more complex design situation.

The two most-common interface techniques are capacitive and resistive sensing. The capacitive approach uses a sandwich of several layers which are electrically isolated from each other, with a top layer of glass, as shown in Figure 3. The presence of a finger changes the resultant electrostatic field and capacitance. How this change in field and capacitance is actually detected depends on the controller approach which the user chooses to implement; there are four distinct analog-circuit techniques in standard use for capacitive sensing (charge transfer, relaxation oscillator, transmit/receive signal, and voltage ramp plus analog/digital converter). 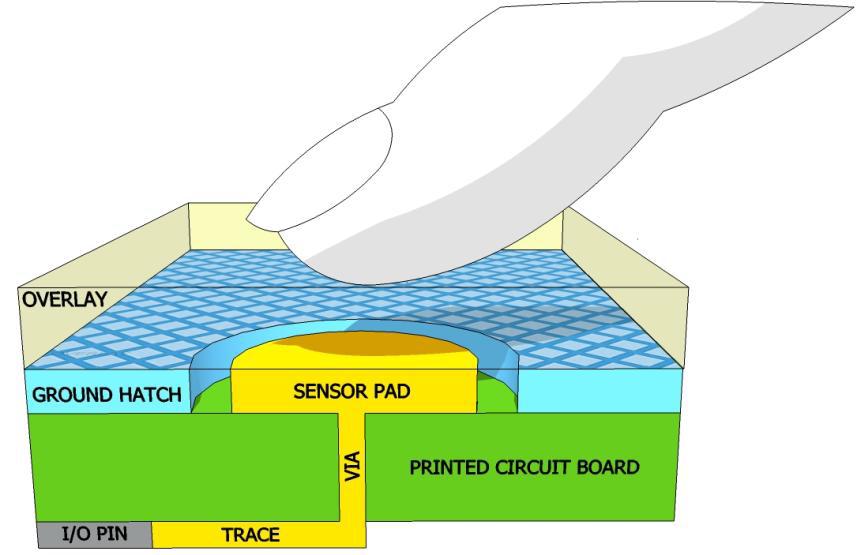 Like the capacitive approach, the resistive design also uses multiple layers coated with a transparent, electrically conductive material (usually indium tin oxide). A "touch" occurs when finger pressure on the surface puts the top two conductive layers in contact with each other, to close the electrical circuit (this is called pressure sensing). Again, analog-based circuitry is needed to determine that a valid touch has occurred and where it is.

So, go resistive or go capacitive? In general, the resistive approach is less expensive, can be used with a finger, or gloved hand, or stylus, and is capable of pin-point precision. But it requires harder pressure and may have reduced contrast due to the extra layers of material required over the screen, and it does not support multitouch sensing. On the other hand, capacitive-based sensing uses a glass layer, so it is brighter and sharper, but more fragile. It uses the inherent capacitive effect of the human finger, and so it is very sensitive, but will not work through gloves; and it does support multitouch. In terms of cost, a capacitive screen is generally more expensive than a resistive one of the same size, but there are many variables in the overall pricing issue.

It is estimated that capacitive touch sensing had a little over 50 percent of the market, while resistive-based sensing had about 25 percent in 2012. The remaining 25 percent was divided among other specialized techniques such as LCD in-cell and on-cell, acoustic wave, and optical approaches, each having a unique attributes making it the best choice for niche situations (such as use on extremely large screens in a mall-like setting).

Regardless of the touch-sensing approach used, it takes a sophisticated analog interface and signal processing to sense the change caused by the user's finger, then validate and verify it as a legitimate touch despite many electrical and user artifacts, and identify where it occurred. That's where the opportunity for IC vendors with some analog-interface expertise and innovative approaches arises, with IC-controller solutions using different techniques are available to OEMS.

Representative of the architecture of a widely used solution, Cypress Semiconductor offers three families of capacitive-sensing controllers based on Programmable System on Chip (PSoC) platform, and embeds different aspects of their SmartSense™ algorithm. These algorithms provide basic noise immunity as well as auto-tuning to continually self-adjust to ambient issues which normally affect sensing performance, such as internal and external electrical noise, EMI spikes, variations in material thickness and power-supply values, and many more. Overall, there are over a dozen conditions which must be factored into the touch/no touch decision; some are static, and need to be assessed only once; but many are dynamic and vary with user, location, and application environment.

The Cypress CapSense family supports up to 33 capacitive buttons and six sliders on a screen, using a voltage ramp plus analog/digital converter technique. With the CY8C20xx6A members of the family, for example, a sigma-delta modulator (a type of A/D converter) converts the current to be measured into a digital count using what is called an equivalent-resistor topology, as shown in Figure 4. When a finger is on the sensor, the capacitance increases and the equivalent resistance decreases. This causes an increase in current through the resistor, resulting in an increase in the digital count. 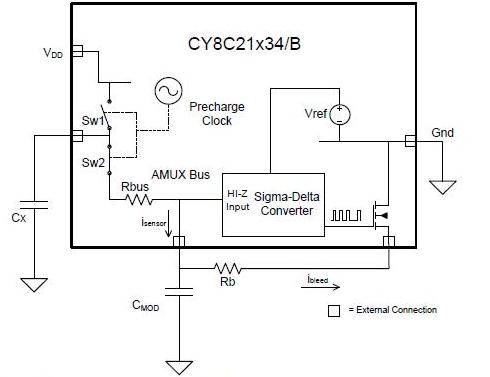 Once the basic touch has been detected, there is still considerable signal processing to be done to determine if the apparent touch was legitimate. This includes eliminating artifacts such as a hesitant finger-touch or nervous double-tap, filtering out signal jitter or chatter which may occur when sliding a finger across the screen, and other complex false positives and negatives. Doing so requires algorithms which are tuned to both the possible touch scenarios as well as distorting and corrupting influences – which appear as different types of noise – for which the controller must compensate and accommodate.

To those who lamented the presumed inefficiencies and potential hazards of the venerable QWERTY keyboard, the widespread adoption of touchscreens for products ranging from small to large is good news. It's also further proof that extrapolating from today's technology to tomorrow's crises is a risky undertaking. For vendors of touchscreen-controller ICs, it's very good news, with a much more predictable scenario – at least for the next few years.