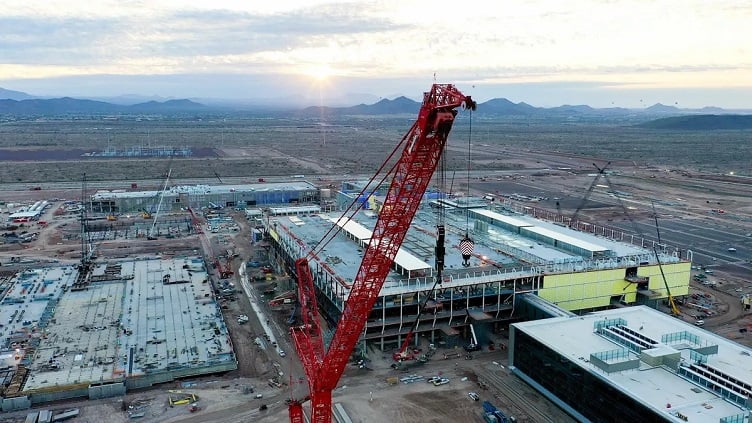 Construction of the two TSMC fabs in Arizona, just north of Phoenix, that will be two of the most sophisticated factories in the U.S. Source: TSMC

Leading pure-play foundry Taiwan Semiconductor Manufacturing Co. (TSMC) has not just confirmed it is building a second semiconductor manufacturing fab at its Arizona location, but it has also started construction on the facility.

The second facility, which will be built adjacent to the first fab it started building north of Phoenix, is scheduled to begin production of 3 nm process technology in 2026.

“When complete, TSMC Arizona aims be the greenest semiconductor manufacturing facility in the United States producing the most advanced semiconductor process technology in the country, enabling next generation high-performance and low-power computing products for years to come,” said Mark Liu, chairman of TSMC. “We are thankful for the continual collaboration that has brought us here and are pleased to work with our partners in the United States to serve as a base for semiconductor innovation.”

TSMC said it will add more than 10,000 construction workers that helped with construction on the first fab. When completed, the two fabs will create an additional 10,000 high-paying high-tech jobs including 4,500 direct TSMC jobs.

After the fabs are completed, they will be capable of manufacturing more than 600,000 wafers per year with an estimated end-product value of more than $40 billion, TSMC said.

U.S. President Joe Biden visited the fab construction site in Arizona this week along with executives from Apple, AMD and Nvidia that all have a stake in the development of the fabs as they plan to use it for future semiconductors.

In a recent report, Apple said it will expand its supply of chips from plants in Europe as well as the Arizona TSMC fab in an effort to reduce its reliance on Asian chip manufacturing.

Other companies are also following suit as Intel Corp. has signed up to build semiconductors for U.S. tech giants Amazon and Qualcomm through its recently introduced Intel Foundry Services.

Intel, which is building a total of four new fabs in the U.S., said it is getting back into the foundry business as an effort to reduce reliance on Asian semiconductor manufacturing and boost domestic chip making. It also recently acquired Tower Semiconductor to expand its foundry options to European and U.S. fabless companies.