Intel becomes a landowner in Germany 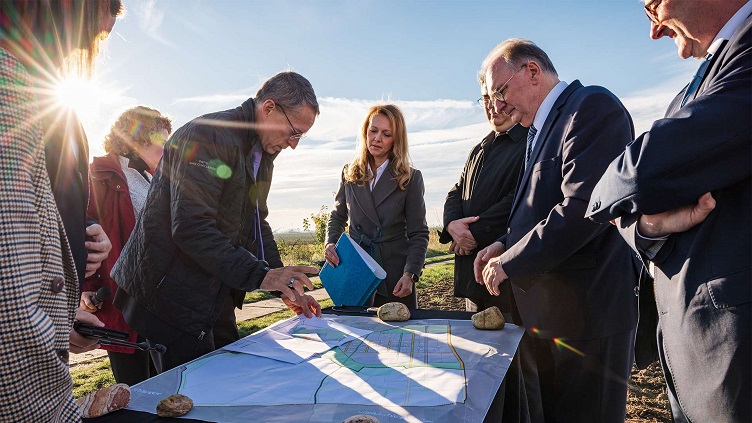 Intel officials meet with German government on the land Intel plans to build a chip fab. The Magdeburg, Germany location is one of three new fab locations Intel is building. Source; Intel

Intel Corp. has become a landowner in Magdeburg, Germany, the location of its planned European semiconductor fab.

Additionally, the company has chosen Bechtel as its general contractor on the Ohio manufacturing facilities already under construction.

The move continues Intel’s so-called IDM 2.0 strategy, which is a multiyear plan to transform the company back into a manufacturing powerhouse with five process nodes set to be completed in the next four years as well as the construction of at least four to six new fabs.

Intel, along with other government bodies and trade organizations, believes that semiconductor manufacturing is in a vulnerable position given that 80% of current capacity is held in Asia. Diversifying chip manufacturing will help bolster the supply chain today as well as in the future if another pandemic happens or geopolitical events crop up.

Investing for the future

Intel said that while the plans for new chips fabs in Germany and Ohio were made prior to current geopolitical and economic conditions, it is continuing to invest in these areas to prepare for the future.

The hope is that Intel can grow its U.S. and European manufacturing to create a healthier chip ecosystem and that means investing now even if chip demand is faltering after a more than two year long semiconductor shortage. However, the Semiconductor Industry Association said the chip market will increase in demand 5% every year until 2030. At that point, the semiconductor industry will have a total addressable market of $1 trillion — about double what it is today.

The plan is to continue to invest in the capacity Intel believes it will need in the future and that includes investing in space and initiating equipment spending based on demand, technology and product readiness milestones, Intel said.

Last year, Intel announced it would build two additional fabs at its Ocotillo campus in Chandler, Arizona, and would invest $20 billion to expand capacity for its new Intel Foundry Services, a new division that would woo European and U.S. fabless companies to have their semiconductors manufactured by Intel.

Earlier this year, Intel signed a chip manufacturing agreement with Brookfield Asset Management that will help Intel to jointly invest $30 billion at the campus with Intel funding 51% and Brookfield funding 49%.

Meanwhile, Intel broke ground on the fabs located in Licking County, Ohio, in August, the first brand-new manufacturing site Intel has built in the U.S. in decades. Intel said it would spend about $20 billion on the new fabs.

At the Magdeburg location, Intel pledged to invest $18.6 billion for a mega-site as part of a spending spree that will cover some $87 billion over the next decade and numerous countries. In addition to the fabs in Germany, Intel will create a new design hub in France, a back-end packaging and assembly plant in Italy and expand foundry services in Poland, Ireland and Spain.