E-skin wearable developed without any onboard chips or batteries 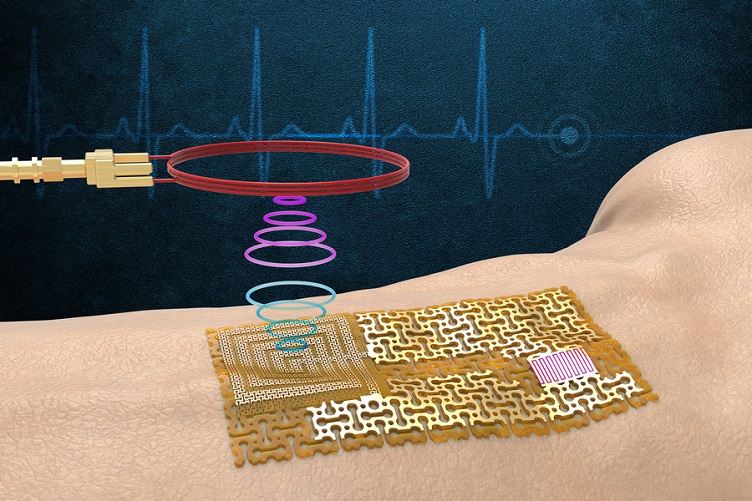 The e-skin that houses a sensor that can both wirelessly connect and monitor human conditions making it applicable for both fitness trackers and medical monitors. Source: MIT

MIT engineers have created a new wearable sensor that can communicate wirelessly and does not require onboard chips or batteries.

The design is in the form of an electronic skin (e-skin), which is a flexible, semiconducting film that adheres to the body like tape. It is used to monitor medical conditions such as blood pressure, glucose concentrations, heart rate and activity levels.

The e-skin could be used for new versions of fitness trackers and could create an entirely new realm of healthcare wearables.

Traditional sensors are used in the wireless industry for a variety of applications and in the healthcare field these sensors communicate via embedded Bluetooth chips that are powered by small batteries. However, these semiconductors and power sources are bulky and are too large to be used for small, thin or flexible form factors.

The piezoelectric properties of the gallium nitride could be used simultaneously for both sensing and wireless communication, MIT said.

Engineers were able to produce pure, single-crystalline samples of gallium nitride paired with a conducting layer of gold to boost any incoming or outgoing electrical signals. The device was sensitive enough to vibrate in response to a person’s heartbeat as well as to the salt in their sweat and the material could generate an electrical signal capable of being read by a receiver nearby. This allowed MIT to not need a chip or battery while still being able to wirelessly transmit sensing information.

“Chips require a lot of power, but our device could make a system very light without having any chips that are power-hungry,” said Jeehwan Kim, associate professor of mechanical engineering and of materials science and engineering at MIT. “You could put it on your body like a bandage, and paired with a wireless reader on your cellphone, you could wirelessly monitor your pulse, sweat, and other biological signals.”

Previously, the MIT engineers developed a remote epitaxy that allowed them to grow and peel away ultrathin semiconductors from wafers coated with graphene. They developed a way to fabricate and explore various flexible and multifunctional electronic films.

With the gallium nitride-based sensors adhered to the skin, electric signals could then convert into an electrical signal at a frequency which a wireless receive could register. Any changes to skin conditions could be monitored and automatically transmitted to the receiver.

“If there is any change in the pulse, or chemicals in sweat, or even ultraviolet exposure to skin, all of this activity can change the pattern of surface acoustic waves on the gallium nitride film,” said Yeongin Kim, former MIT postdoc and current assistant professor at the University of Cincinnati. “And the sensitivity of our film is so high that it can detect these changes.”

After creating the thin film of pure, high-quality gallium nitride, MIT paired it with a layer of gold to boost the electrical signal in a lattice-like configuration. The gallium nitride and gold measured just 250 nanometers thick, or about 100 times thinner than the width of a human hair.

They then placed the e-skin on wrists, necks and used a simple antenna to register the device’s frequency without physically contacting the sensor itself. The skin was able to sense and wirelessly transmit changes in the surface acoustic waves of the gallium nitride on the skin related to heart rate.

Additionally, the device was paired with a thin ion-sensing membrane that selectively attracts a target ion and sodium. The device could sense and wirelessly transmit sodium levels as a volunteer held onto a heat pad and began to sweat.

While this is the first step toward a chip-free wireless sensor, the device could be paired with other membranes to monitor other vital biomarkers in the future.

“We showed sodium sensing, but if you change the sensing membrane, you could detect any target biomarker, such as glucose, or cortisol related to stress levels,” said Jun Min Suh, an MIT postdoc. “It’s quite a versatile platform.”