UC Berkeley engineers have developed a flexible sensor system that can measure metabolites and electrolytes in sweat, calibrate the data based upon skin temperature and sync the results to a smartphone in real-time.

Though not the first wearable health monitoring system ever created, it is the first fully integrated electronic system that can provide continuous, non-invasive monitoring of biochemicals in sweat.

The engineers’ new system paves the way for a new generation of devices that can alert users to health problems such as fatigue, dehydration and high body temperatures. 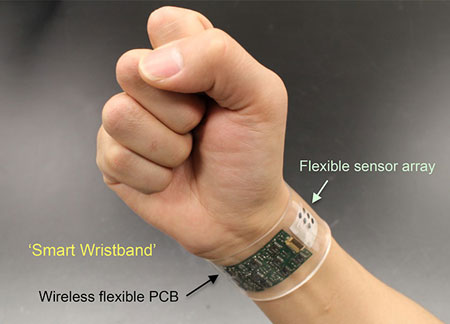 “Human sweat contains physiologically rich information, thus making it an attractive body fluid for non-invasive wearable sensors,” says Ali Javey, UC Berkeley professor of electrical engineering and computer sciences. “However, sweat is complex and it is necessary to measure multiple targets to extract meaningful information about your state of health. In this regard, we have developed a fully integrated system that simultaneously and selectively measures multiple sweat analytes, and wirelessly transmits the processed data to a smartphone. Our work presents a technology platform for sweat-based health monitors.”

Typically, when researchers want to study the effects of exercise on humans, they take blood samples, but the new non-invasive sweat sensors open the door to new methods that won’t require any needles. The Berkley prototype comes equipped with five sensors placed onto a flexible circuit board. The sensors measure the glucose, lactate, sodium, potassium, and skin temperature.

“The integrated system allows us to use the measured skin temperature to calibrate and adjust the readings of other sensors in real time,” says Gao. “This is important because the response of glucose and lactate sensors can be greatly influenced by temperature, said Wei Gaom postdoctoral fellow in the lab.

The wireless printed circuit board was created with off-the-shelf silicon components. The researchers used more than 10 integrated circuit chips which recorded measurements, amplified signals, and wirelessly transmitted the data. They also developed an accompanying app to sync the data and then placed their device on wristbands and headbands for testing, which was conducted on multiple volunteers performing indoor and outdoor exercises.

In the future, the engineers believe they can easily shrink the device by integrating all the circuit functionalities into a single chip.