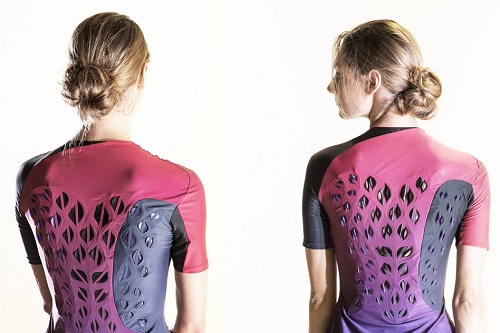 The workout suit prototype contains live cells that help keep body heat and sweat down as people exercise. Source: MIT Researchers at MIT have developed a new smart fabric that contains ventilating flaps that open and close in response to an athlete’s body heat and sweat.

The thumbnail-sized flaps contain live microbial cells that shrink and expand in response to changes in humidity. The cells act like tiny sensors and actuators driving the flaps to open when an athlete works up a sweat and pulling them closed when the body has cooled off.

The researchers have also created a running shoe with an inner layer with similar cell-lined flaps to air out and keep away moisture.

MIT used live cells because the cells require no additional elements to sense and respond to humidity. The cells are also safe to touch and consume, and they can be prepared quickly, even in vast quantities, making it especially applicable to mass production of smart clothing.

“We can combine our cells with genetic tools to introduce other functionalities into these living cells,” says Wen Wang, a former research scientist in MIT’s Media Lab and Department of Chemical Engineering. “We use fluorescence as an example, and this can let people know you are running in the dark. In the future we can combine odor-releasing functionalities through genetic engineering. So maybe after going to the gym, the shirt can release a nice-smelling odor.”

Researchers worked the biofabric into a wearable garment running suit with cell-lined latex flap across the suit’s back. Each flap is based on maps of where the body produces heat and sweat. Support frames underneath each flap keep the fabric’s inner cell layer from directly touching the skin, while at the same time the cells are able to sense and react to humidity changes in the air lying just over the skin.

“People may think heat and sweat are the same, but in fact, some areas like the lower spine produce lots of sweat but not much heat,” says Lining Yao, a former graduate student at MIT. “We redesigned the garment using a fusion of heat and sweat maps to, for example, make flaps bigger where the body generates more heat.”

In testing, people that donned the garment and worked out on treadmills and bicycles were monitored for temperature and humidity. After five minutes, the suit’s flap started opening up, right around the time when participants reported feeling warm and sweaty. The flaps effectively removed sweat from the body and lowered skin temperature.

For the ventilated running shoes, multiple flaps were sewed downward with the cell-lined layer facing toward a runner’s foot.

“In the beginning, we thought of making the flaps on top of the shoe, but we found people don’t normally sweat on top of their feet,” Wang says. “But they sweat a lot on the bottom of their feet, which can lead to diseases like warts. So we thought, is it possible to keep your feet dry and avoid those diseases?”

As someone works out, the flaps on the shoe open and lit up when researchers increased the surrounding humidity while in dry conditions the flaps faded and closed.

Next the team wants to collaborate with sportswear companies to commercialize the design, while also looking at incorporating the technology into other fabrics such as curtains, lampshades and bedsheets.

“We are also interested in rethinking packaging,” Wang says. “The concept of a second skin would suggest a new genre for responsive packaging.”

The entire research findings can be found in the journal Science Advances.