All about sweat sensors 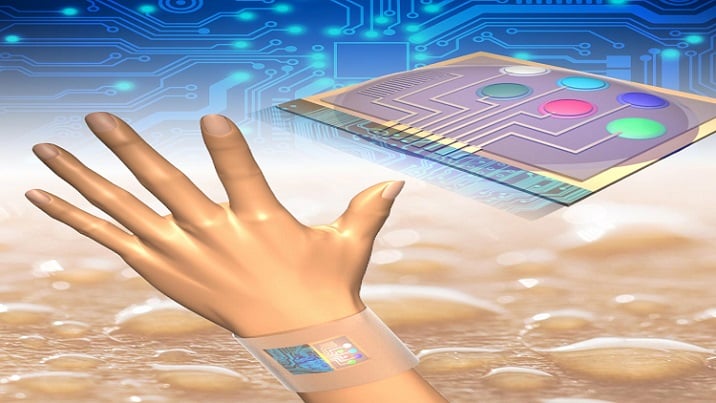 Wearable sensors have been engineered to collect physiological data from sweat. Source: University of California Berkeley

Sweating is a mechanism by which tiny volumes of fluid are produced by the sweat glands of a normal adult person, under various temperature conditions. The product of eccrine sweat gland action, sweat is readily available from the skin surface and is abundant in biochemical data including electrolytes (for example, potassium and sodium ions) and metabolites (such as glucose and lactate). Sweat is an immensely important biofluid since it can be collected using non-invasive techniques relative to other biofluids like blood.

Eccrine sweat glands-based sweat sensing has been an overlooked field of study, particularly for wearable sensors, until recently. But with the production of sensors with integrated sweat stimulus, constant sweat sampling is now feasible. With the use of multiplexed sensing arrays, sweat sensing has emerged as a 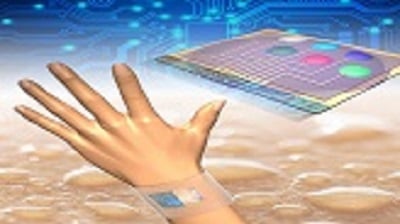 Sweat biosensors typically analyze electrolytes such as chloride, potassium and sodium to analyze the sweat for healthcare and other applications. Though sodium analyte is known to be a good biomarker for electrolyte imbalance, there is no information to suggest that sodium present in sweat is related to blood. Even then, sweat sodium has been recently used to associate localized levels of sweat with electrolyte loss and whole-body fluid. Sweat potassium and blood association has still to be proven while chloride in sweat chloride has been demonstrated of value in the detection of cystic fibrosis.

Urea and lactate are also analytes present in abundant quantities but do not show a strong correlation between blood and sweat. The association between sweat lactate levels and blood lactate levels is hard to determine because of the extra localized generation of lactate by the sweat gland during perspiration. Although sweat lactate cannot presently be specifically linked to the whole-body environment, it can at the very minimum be associated with the levels of exertion of sweat glands according to the whole-body environment. Levels of urea in sweat have been related to the monitoring of kidney dysfunction and can be seen on the skin of infected patients as white crusts. Recently, wearable flexible sweat sensors have also been shown to measure ethanol and calcium levels in sweat.

The wearable sweat sensors are widely classified as flexible and non-flexible. For the application of gathering physiological data from sweat, the wearable sweat sensors should be placed near the skin for an ideal in vivo processing and examination, while still being able to sustain complex usage and still also being suitable to wear. For this analysis, wearable flexible sensors are chosen to go with the non-planar surface of human skin. Lately, with advancements in fabricating wearable flexible sensors, signal processing circuitry has been integrated and embedded into them to analyze real-time data and transmit it wirelessly to a smart device or a computer. For wireless data transmission, Bluetooth has been the popular technology because of its relatively low installation expenditures, lower hardware requirements and good compatibility when compared with other wireless modules like Zigbee and Wi-Fi.

The most commonly used sweat sensors are wearable flexible sweat sensors that can be used for detecting various sweat analytes. The choice of wearable flexible sweat sensor would depend upon the analyte and its corresponding application, for example, detection of an illness or monitoring body conditions. Currently, with progress in sensor manufacturing methods, multiple sensors can be embedded into one flexible system and integrated with signal processing circuitry. Moreover, the integration of wireless data transmission modules with such advanced sweat sensors has also made it possible to analyze sweat analyte levels in real-time and transmit data wirelessly.