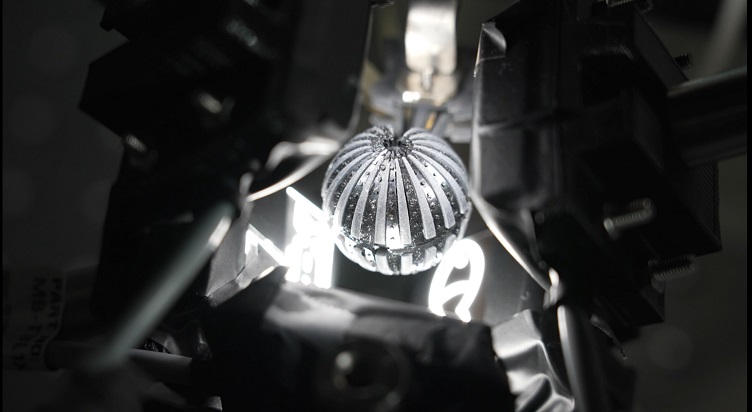 The artificial eye that was tested to have consistent image quality in land or water with a nearly 360-degree field of view. Source: MIT CSAIL

Researchers at MIT’s Computer Science and Artificial Intelligence Laboratory (CSAIL), the Gwangju Institute of Science and Technology (GIST) and Seoul National University in Korea have developed an artificial vision system that replicates the vison of the fiddler crab to allow for navigation on both land and water.

The fiddler crab has amphibious imaging ability and an extremely wide field of view. The artificial eye resembles a spherical, nondescript, small, black ball, which allows input through a mixture of materials that process and understand light.

Researchers combined an array of flat micro lenses with a graded refractive index profile and flexible photodiode array with comb-shaped patterns. This was all wrapped in a 3D spherical structure designed so that light rays from multiple sources would always converge at the same spot on the image sensors regardless of its surroundings.

MIT tested the amphibious and panoramic imaging capabilities of the artificial eye during in-air and in-water experiments by imaging five objects with distances and directions. The system provided consistent image quality and nearly a 360° field of view in both air and aquatic environments.

“Our system could be of use in the development of unconventional applications, like panoramic motion detection and obstacle avoidance in continuously changing environments, as well as augmented and virtual reality,” said Young Min Song, professor of electrical engineering and computer science at GIST.

The five objects were a dolphin, airplane, submarine, fish and ship and were measured at different distances projected onto the artificial vision system from different angles. Multi laser spot imagining experiments and the artificial images matched the simulation.

The full research can be found in the journal Nature Electronics.