Nanoelectronics for 2020 and Beyond

The Annual Nanotech Conference is arguably the largest conference of its kind in the world. And because it took place in Washington, D.C. in May, the event attracted even more attendees, including representatives from the Department of Energy (DOE), National Institute of Standards and Technology (NIST), National Science Foundation (NSF), Department of Labor (DOL), Director of National Intelligence (DNI), NASA and even members of Congress. Government luminaries, in turn, rubbed elbows with electronic industry executives from the likes of IBM, Siemens, GE, and Intel, along with executives from a range of other industries including pharmaceuticals and chemicals.

What brought them all together? Quite simply, the pressing need for the U.S. to change course before it loses its competitive edge in many critical areas of technology, most of which are directly related to nanotechnology.

To this end, back in 2000 the U.S. government brought together eight federal agencies to create the National Nanotechnology Initiative (NNI). Today NNI includes participation from 27 federal agencies. Its mission is fourfold:

2. To foster the transfer of new technologies into products for commercial and public benefit

3. To develop and sustain educational resources, a skilled workforce, and the supporting infrastructure and tools to advance nanotechnology

4. To support the responsible development of nanotechnology

According to Curt Richter, the leader of the Nanoelectronics Group at NIST, the NNI’s vision is to develop “a future in which the ability to understand and control matter at the nanoscale leads to a revolution in technology and industry that benefits society.”

Within the framework of the NNI, there are subgroups to address specific technologies. These subgroups, called Nanotechnology Signature Initiatives (NSI), include the following as described by Richter:

• Sustainable Nanomanufacturing: Creating the Industries of the Future

• Nanoelectronics for 2020 and Beyond

• Improving and Protecting Health, Safety, and the Environment

“Nanoelectronics for 2020 and Beyond” seeks to keep the U.S. at the cutting edge in semiconductor technology. With silicon reaching its limits as an engine of processing progress in the industry and CMOS scaling (Moore’s Law) driving information-processing advances and the semiconductor industry for decades, a juncture has been reached where other factors limit the ability to increase performance, even if the density of transistors in chips can be raised.

One limitation is the clock speed of microprocessors, where a plateau has been reached and the speed of single microprocessors has not increased since 2003 – a decade ago! This is the reason why more and more computers are using dual- or multi-core processors: instead of one processor, two or three processors are being installed to speed computers. 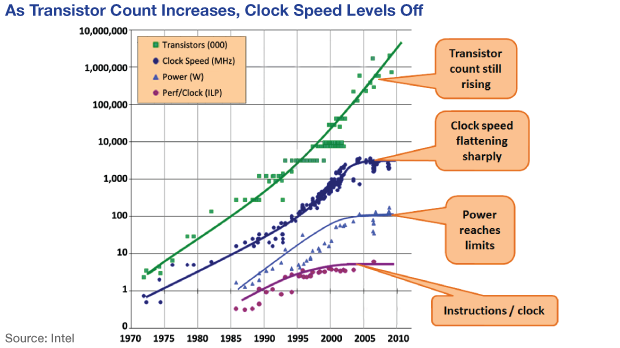 These limitations, as is commonly known, have a singular source: heat. The ability of a microprocessor to remove heat, or dissipate power, is the limiter for CMOS scaling today. Because the industry is making smaller chips with higher-density transistors, heat removal becomes extremely difficult. The graph below, courtesy of IBM, captures the challenge.

What is needed, then, are “lower-powered electronics – nanoelectronics beyond 2020 – to continue the performance advances traditionally associated with Moore’s Law,” said NIST’s Richter.

The goal of this initiative is to “accelerate the discovery and use of novel nanoscale fabrication processes and innovative concepts to produce revolutionary materials, devices, systems and architectures to advance the field of nanoelectronics,” said Richter. 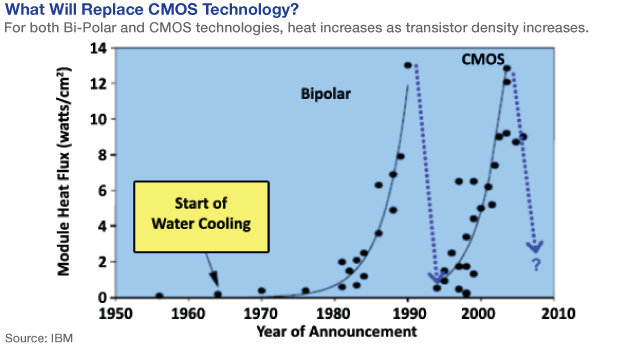 There are five goals – “thrusts,” Richter call them – that industry, academia and government must follow to make the leap from CMOS to nanoelectronics. The goals are:

The Nanoelectronics for 2020 and Beyond initiative is being driven by two important factors:

1. Economic drivers: The global semiconductor industry is responsible for driving innovation, productivity and market growth in industries as diverse as energy, transportation, telecommunications, medical and across a variety of service industries.

“The mission of the initiative, in general, is to demonstrate non-conventional, low-energy technologies which can outperform CMOS on critical applications in 10 years and beyond,” said Richter.

How does NNI expect to accomplish this? Thought the replacement of silicon-based CMOS technologies with grapheme devices, tunnel-transistors, spintronics, nanophotonics, nanomagnetics and other innovations.

Electronics360 will be exploring each of the NNI’s five goals in upcoming articles.