Heilind Electronics, a global distributor of electronic components and authorized distributor for Amphenol Pcd, is now stocking the manufacturer’s RJF and RJFTV6A series of Cat 6A modular Ethernet connectors.

RJFTV 6A and RJF 6A allow the use of an Ethernet Class Ea/Cat 6A connection for 10 BaseT, 100 BaseTx, 1000 BaseT or 10G BaseT (up to 500 MHz) networks in harsh environments. With the patented RJStop system, a standard RJ45 cord set can be utilized in a metallic plug without the need for hazardous on-field cabling or 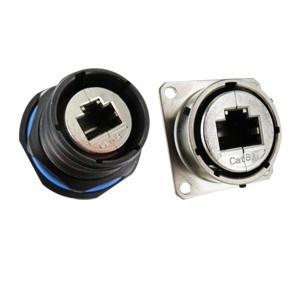 The new solution includes a wide range of options, including reverse bayonet, push pull, bayonet, threaded and lever coupling configurations in both plastic and metal material. In addition, the metal circular connectors use a Tri-Start thread coupling mechanism (MIL-DTL-38999 series III-type) with an anti-decoupling device — making them ideal for use in harsh conditions.