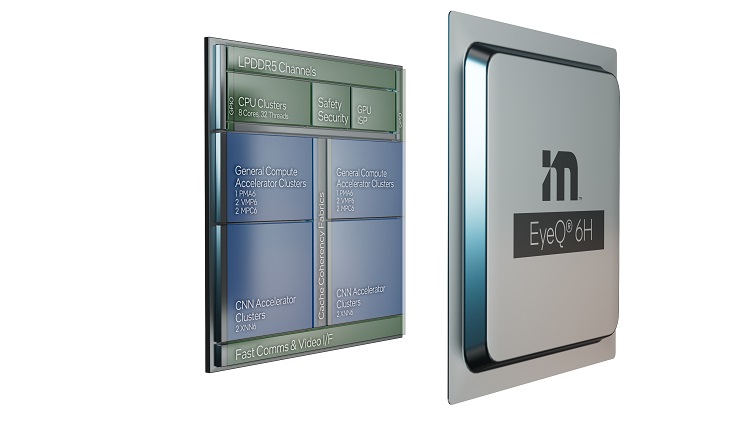 The EyeQ Ultra is targeting consumer autonomous vehicles with delivering up to 176 TOPS of performance. The chip is slated for production by 2025. Source: Mobileye

Called EyeQ Ultra, the SoC is built specifically for consumer autonomous driving and delivers 176 trillion of operations per second (TOPS). The EyeQ Ultra is designed to deliver power and performance needed for autonomous vehicles with the first silicon expected to be available by the end of 2023 and full automotive-grade production by 2025.

“Consumer AV is the end game for the industry,” said Amnon Shashua, president and CEO at Mobileye. “By developing the entire self-driving solution — from hardware and software to mapping and service models — Mobileye has a unique perspective into the exact requirements for the self-driving system that enables us to reach the performance-and-cost optimization that will make consumer AVs a reality.”

Mobileye said the EyeQ Ultra packs the performance of 10 EyeQ 5s in a single package and is manufactured using a 5 nm process technology. The technology will be able to handle all needs and applications of Level 4 autonomous driving without the power consumption and costs related to integrating multiple SoCs together, the company said.

The chip is more efficient than other AV offerings, Mobileye said, by using an array of four classes of accelerators built for a specific task. These are paired with additional CPU cores, ISPs and GPUs along with sensing subsystems for lidar and radar, which can all be run through the EyeQ Ultra.

The company said a more efficient and cost-effective chip unlocks the potential for more self-driving cars to be developed at different price points across the automotive value chain.

While the EyeQ Ultra will be for future consumer autonomous cars, Mobileye has unveiled two new chips for advanced driver assistance systems (ADAS).

The EyeQ6L is the successor to the EyeQ4 that is just 55% of the size of that device. The one-box windshield solution delivers deep-learning TOPS for entry into Level 2 ADAS. The chip should be in production in the middle of 2023.

The second chip is the EyeQH that will support ADAS and partial autonomous capabilities with full surround. The chip is equivalent to two EyeQ5 SoCs in terms of computing power but supports visualization and performs better under heavy artificial intelligence workloads. The ADAS solutions support includes multi-camera processing, parking visualization and river monitoring. The chip is expected to be in production by the end of 2024.

Meanwhile at CES, Mobileye signed or extended deals with automakers including Volkswagen Group, Ford and Zeekr.

The deal with VW is the first time an automotive OEM will apply Mobileye’s mapping data to help enhance ADAS features. Mobile Roadbook is a crowd-sourced, cloud-generated database of maps and VW will use the data to enhance its Travel Assist 2.5 system.

Ford announced plans to extend its collaboration with Mobileye to begin using its road experience management (REM) technology in future versions of the Ford BlueCruise, a hands-free system for a driver-facing camera that can detect if the driver is paying attention to the road or not. The companies are also working together on an open platform to allow Ford to build and integrate Ford’s own solutions to make driving safer and easier.

In the deal with Zeekr, an electric mobility tech brand from Chinese automotive giant Geely Holding Group, a new all-electric vehicle with Level 4 autonomous capabilities will be built using Mobileye’s True Redundancy sensing, REM mapping technology and responsibility-sensitive safety (RSS)-based driving policy. This will be complemented by Geely’s redundant braking, steering and power technology. Mobileye said it will be the first Level 4 vehicle for consumers with a debut expected by 2024 in China.