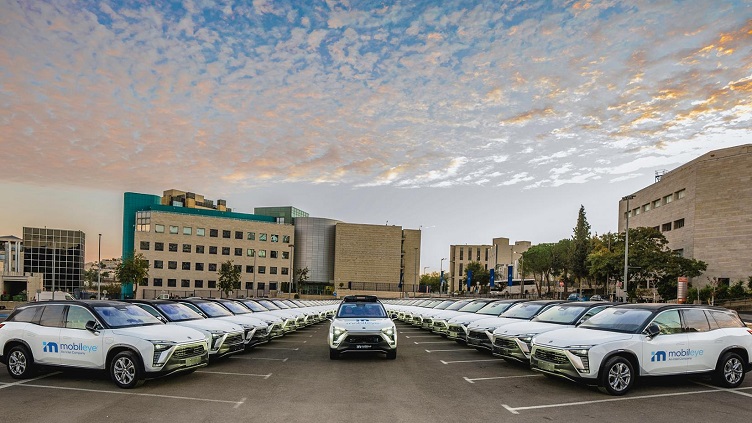 A fleet of vehicles equipped with Mobileye’s Drive system that includes hardware and sensors for autonomous capabilities. Source: Intel

Intel Corp. plans to take Mobileye, its self-driving arm, public via an initial public offering in the mid 2022 time frame.

Intel will remain the majority owner of Mobileye and collaborate on projects for the automotive sector including the advancement of autonomous vehicle technology and the computing that is needed to power these future cars.

Intel acquired Mobileye in 2017 and since that time the company has experienced revenue growth year-over-year. This year, Mobileye is expected to have 40% more revenues than in 2020, according to Pat Gelsinger, Intel CEO.

Amnon Shashua will remain on board as CEO after the IPO and Moovit, a company Intel acquired in 2020 that provides mobility-as-a-service, will be included in the offering. Intel’s lidar and radar teams will also be part of the new company.

While the IPO will create a separate company, Intel will remain the majority owner and said it has no plans to sell off that stake.

Intel said it will still be committed to the automotive market in the long term. The company recently launched its Foundry Services Accelerator and dedicated capacity for the automotive industry. Intel will continue to support Mobileye with resources as the company continues to test and deploy autonomous vehicles to public spaces.

Mobileye has seen rapid growth in 2021 for its autonomous vehicle technology including shipping its 100 millionth EyeQ system-on-chip and began self-driving pilot projects globally.

In March, Mobileye announced it would launch an autonomous shuttle service in France and Israel along with Transdev and Lohr Group. The shuttles, manufactured by Lohr Group, would transport passengers on roadways and be integrated into cities’ transportation infrastructure. The shuttles are scheduled to go into production in 2022 with deployment slated for 2023.

Mobileye also began testing self-driving cars in New York City, one of the largest cities in North America, after receiving a permit to drive AVs on the city’s streets. Mobileye said it is the only company currently with an AV testing permit for New York City.

In September, Mobileye started a ride-hailing service for Tel Aviv, Israel, and Munich, Germany, where six passenger self-driving cars equipped with Mobileye Drive technology would ferry passengers around the city. The system includes eight EyeQ5 SoCs and will operate under the MoovitAV service branding.

Previously, Mobileye tested its technology in Japan in a deal with Willer for a robotaxi service and began testing AVs in Korea.