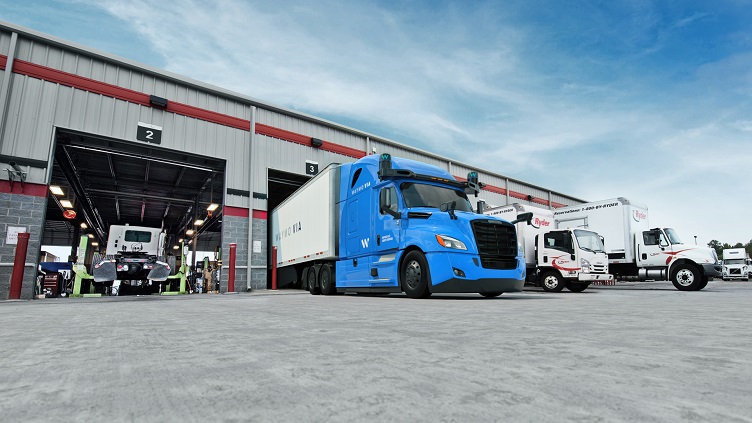 Waymo Via and Ryder trucks at a hub. The companies will partner together to test autonomous trucks in southwest states going forward. Source: Waymo

Waymo is ramping up testing of its Waymo Driver system on Class 8 trucks by expanding operations across Texas, Arizona and California.

Waymo Via, the autonomous trucking wing of Waymo, is working with Daimler Trucks to develop Level 4 redundant vehicle platform.

The company plans to build a dedicated hub in the Dallas-Ford Worth area to grow its Texas footprint. The 9 acre hub will be built from the ground up for Waymo Via and its autonomous driving operations. The facility will be the primary operations center for Waymo’s self-driving trucking business in Texas and will be able to accommodate hundreds of trucks and personnel as it scales its presence in the region and serves as the testing grounds for fully autonomous operations.

The center will not only bolster operations in Texas but will also be able to support long haul routes across the Southwest and connect with Waymo’s Phoenix operations center, the company said.

Waymo is partnering with Ryder for fleet management services such as fleet maintenance, inspections and roadside assistance across Waymo hubs and testing sites.

This partnership will be a component of Waymo’s driver-as-a-service model to develop autonomous truck maintenance that will maximize vehicle uptime and reliability. Ryder conducts scheduled preventive maintenance and as-needed incidental maintenance while working together to refine and evolve best practices for autonomous driven vehicles.

Long-term, the service will allow autonomous trucks to be optimized through Ryder and Waymo’s autonomous vehicle fleet data, which will be able to create solutions tailored for Waymo’s technology.

The partnership will focus on fleet management across Waymo Via trucking hubs and testing sites in Texas, Arizona, California, Ohio and Michigan.