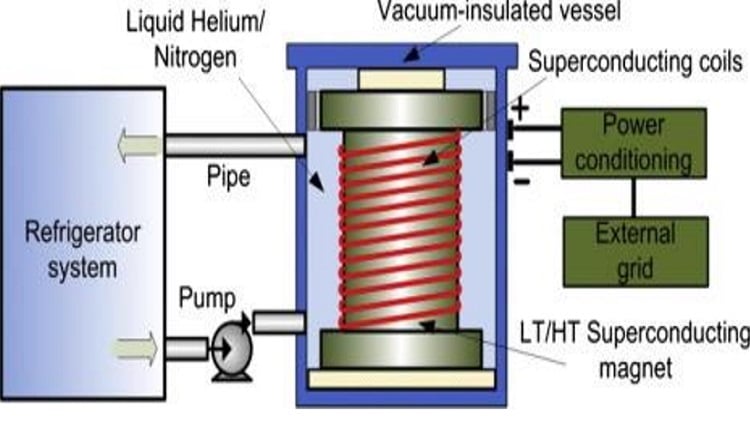 Superconducting magnetic energy storage (SMES) systems use superconducting coils to efficiently store energy in a magnetic field generated by a DC current traveling through the coils. Due to the electrical resistance of a typical cable, heat energy is lost when electric current is transmitted, but this problem does not exist in an SMES system. The technology is based on a cable constructed using a superconducting material cooled at a cryogenic temperature less than its critical temperature. Therefore, SMES systems can store energy for longer as the wire offers negligible resistance to the current flowing through it.

Superconducting materials that are commonly used are niobium-titanium, vanadium and mercury. The energy accumulated in the SMES system is released by connecting its conductive coil to an AC power converter, which is responsible for approximately 23% of heat loss for each direction. In contrast to other storage technologies, such as batteries and pumped hydro, SMES systems lose the lowest power during the storage period, achieving a round-trip efficiency of more than 95%.

Structure of an SMES system

A standard SMES system is composed of four elements: a power conditioning system, a superconducting coil magnet, a cryogenic system and a controller. Two factors influence the amount of energy that can be stored by the circulating currents in the superconducting coil. The first is the coil's size and geometry, which dictate the coil's inductance. Clearly, the bigger the coil, the more energy is contained. The second element is the conductor properties, which are responsible for determining the maximum current. Superconductors are capable of carrying large currents under strong magnetic fields. To keep the system charged, the coil must be sufficiently cooled. Notably, the SMES system's sole conversion operation is from AC to DC; therefore, there are no intrinsic thermodynamic losses involved with the conversion. This results in increased cycle efficiency, rapid charge and discharge, and large storage efficacy.

To date, almost all practical SMES systems have been installed using an alloy of niobium and titanium (Nb-Ti), which supports activity at superconducting temperatures of about 4.2 K. Certain SMES coils used in research are made of high-temperature superconductors. However, the current state of production of these products makes them uneconomical for SMES.

Moreover, due to the fact that only a few SMES coils have been built and assembled, familiarity with a generic design is limited. The highest allowed current in the conductor is a primary concern when designing an SMES coil. It is dependent on the size of the conductor, the superconducting materials involved, the magnetic field produced and the temperature. In the superconducting coil, the magnetic forces may be substantial and should be responded to by a structural material. These forces must be absorbed by the mechanical power of the containment system inside or around the coil. Another consideration when designing the superconducting coil is maximum voltage that it can tolerate.

The power converter should supply positive voltage to the superconducting coil when charging it and storing the energy. In the same way, when energy is to be released to the load, the polarity of the input voltage must be reversed; for example, the electronics in the power converter must now supply a negative voltage. The electrical power is given by multiplying the applied voltage and the instantaneous current. Manufacturers of SMES systems decide the coil current and allowable voltage by considering the performance and safety standards. Thus, the power converter’s power capacity normally dictates the SMES unit's rated capacity. Moreover, the power converter acts as a connection between the stored energy and the alternating current in the national electricity grid.

The controller provides a connection between grid-supplied electrical power and the flow of energy to and from the SMES coil when it is acting as an energy storage device in smart grids. It gets dispatch notifications from the grid stations and details about the SMES coil's status. The system response is determined by the incorporation of the dispatch request and charge state of SMES coil. Additionally, the controller monitors the refrigerator, SMES coil and other devices. It ensures system security and provides the operator with system status information. Recent SMES systems are networked to the internet in order to allow remote monitoring and control.

SMES systems include materials cooled down to cryogenic temperatures that can store energy in the form of magnetic field. Unlike other power storage devices, these systems have lower heat loss and provide high power capacity. They are ideal for solving power quality and voltage stability issues for power companies, industrial customers and military. However, the primary drawback of SMESs is the need for expensive refrigerators and superconducting materials and research continues to address these issues.