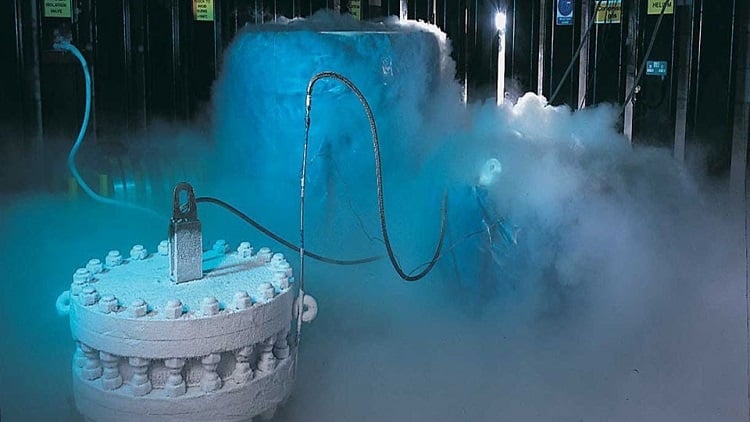 Cryogenics refers to the operation and behavior of components at extremely low or ultra-cold temperatures. Some specialized applications, such as electronic systems on spacecraft or superconducting devices, need cryogenic temperatures to operate. Power electronics devices are used in these applications to provide power to electric machinery or devices. Traditionally, power electronics devices are enclosed in thermal insulation and held at room temperature (300 K). Additional thermal insulation and temperature control requirements add complexity, volume, weight and expense. As such, it will be advantageous if power electronic systems can work at cryogenic temperatures as well.

Research has demonstrated that certain semiconductor devices perform well at lower temperatures, as they will have a smaller on-resistance and a higher switching rate. This implies that operating power electronics systems at cryogenic temperatures will result in decreased power dissipation, as well as reduced volume and weight. In general, a temperature will be considered cryogenic if its value is less than 123 K. The environmental conditions at low temperature can be produced using liquid helium (4 K), liquid nitrogen (77 K) or liquefied natural gas (111 K).

In comparison to power electronics converters operating at room temperature, the specifications for cryogenic systems are comparable, including high performance, durability and power density. However, because of the substantial temperature shift, both the dynamic and static properties of the components in power electronics systems will vary greatly.

A standard power electronic converter is composed primarily of the following components:

• Integrated circuits (ICs) that include analogue components and circuits used in gate or control drives.

• Passive components such as resistors, capacitors, inductors and transformers in control or power circuits.

• Dielectric and interconnection components that include printed circuit boards, solder and insulation materials that sustain the converter electrically or mechanically.

It is critical to consider the cryogenic properties of all the above-mentioned devices in order to pick appropriate components for the designing and manufacturing of cryogenic power electronics.

As already mentioned, when power semiconductor components are operated at lower temperatures or cryogenic temperatures, they operate faster and have a lower on-state voltage when compared with their operation at room temperature. It is because semiconductor materials exhibit superior electrical, electronic and thermal properties at temperatures as low as liquid nitrogen and run at a faster rate due to greater carrier stability and saturation velocity. Thermal conductivity of components and substrate materials benefit dramatically at low temperatures, resulting in simplified thermal control and increased efficiency. Along with conduction losses, cryogenic temperatures reduce the losses due to switching of power devices, resulting in increased power transfer performance.

Numerous passive components and commercially available integrated circuits have been demonstrated to perform satisfactorily at temperatures as low as 50 K, but, the long-term implications of low-temperature processing and repetitive cyclic operation at low temperatures are less well known. For example, some studies have indicated that the effect of low temperature on capacitors, a passive component, is dependent on the dielectric media used, which can include ceramic, mica, polypropylene, film or polycarbonate. Such capacitors operate normally at 77 K and exhibit a decrease in leakage current and dissipation factor at cryogenic temperatures.

Power electronics operating at low temperature has several applications in terrestrial and deep space areas. These include military all-electric vehicles, magnetic levitation transportation systems, super-conducting magnetic energy storage systems, cryogenic instrumentation and medical diagnostics. Cryogenic power conversion has a great deal of promise for future military applications, such as power generators for aircraft and ships and propulsion engines, where weight and size are key design considerations. Superconducting engines provide a major benefit to craft, greatly increasing cargo capacity and ordnance-carrying capability. The reduced scale of the superconductor motor allows for the addition of 20 berths on cruise ships. Moreover, based on the load, the motor's performance improves by 1% to 2%. This equates to annual fuel savings of hundreds of thousands of dollars for the average container ship.

The high temperature superconducting system outperforms legacy copper coils in terms of demagnetizing, as it is more effective at achieving a strong "coil effect" with less power, and is considerably lighter than copper systems. Naval architects will use the weight and space savings to add mission payload, extra fuel, or potential systems to the ship throughout its life. Moreover, cryogenic power electronic systems and superconducting generators also give major benefits to wind energy generation, aircraft dispersed propulsion and a variety of defense areas. For example, the cost of permanent magnet generators for producing power from wind energy is at an alarming rate and superconducting generators can offer reduced costs and size.