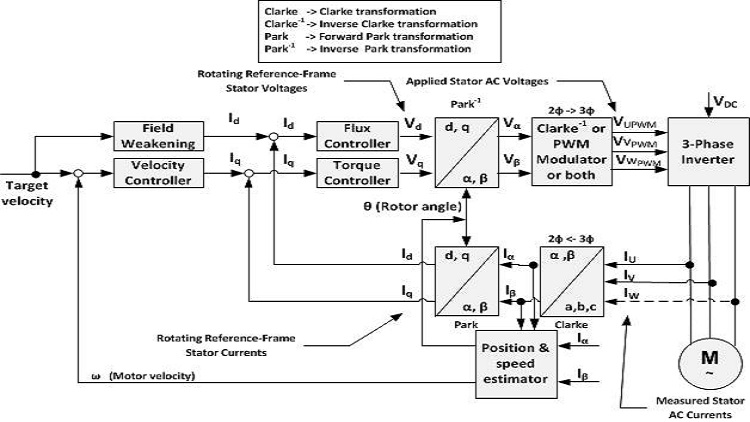 Variable speed drives now account for nearly half of all drives used to regulate motion (energy flow) in variable output processes across all industries ranging from robotics, pumps, compressors and ventilators to residential equipment and electric generators for distributed energy control and conversion. This is to save energy and enhance productivity in different industrial output processes. Advanced speed, position and torque control require encoder-precise feedback to provide high accuracy and rapid reaction. But in situations requiring low power (torque), the encoder is much more costly than the actuator/motor and is mechanically fragile in large and medium power applications.

In electric motor drives, halting a drive accidentally in a safety-critical application results in significant production disruption costs until the defective encoder is replaced. And that is how encoderless control with torque, speed, position and flux state observers became popular. Encoderless control is utilized exclusively in general applications, whereas it is at least offered for redundancy in servo drives. Vector control without a speed encoder is widely used in industrial applications for induction motors and interior permanent magnet synchronous motors.

In general, the rotor speed estimate approaches are classified into two groups: signal injection and estimation methods based on the fundamental model of electric machines. The signal injection methods exhibit low machine parameter sensitivity while providing superior zero speed or low-speed performance in encoderless motor control. In these methods, a low amplitude yet high-frequency signal is fed into the stator windings of the motor, which has a negligible effect on the machine's basic operating characteristics.

[Discover more about encoders at GlobalSpec.]

Nevertheless, high-frequency signal injection techniques are extremely difficult, and their design specifications are not universal and vary according to the machine drive system, making it hard to use this technique universally. Additionally, these approaches are responsible for acoustic noise emissions and ripples in torque signals.

On the other hand, encoderless control approaches based on machine models directly predict the rotor speed using machine dynamic equations. Due to the absence of speed information feedback in open-loop encoderless speed estimators, their implementation is very straightforward. However, noise in voltage-measured signals, measurement, pure integration difficulties, and, notably, machine parameter variations comprise the primary shortcomings of such schemes especially at zero or very low-speed region and impair the dynamic performance of drives both in transient and steady-state operating regions. Generally, open-loop estimators are more reliant on many attributes of induction motors such as stator and rotor inductances and resistances. The estimation accuracy, on the other hand, is highly dependent on the precision of the machine parameters employed in the estimator model.

Closed-loop encoderless estimation approaches, on the other hand, vary from open-loop estimation techniques primarily in that they employ an error signal between the measured and estimated values to enhance the dynamic performance of electric motor drives control. However, in a closed-loop, it is feasible to improve the speed estimator's resilience against signal noise and parameter mismatch. As a result, closed-loop speed estimators are more accurate than open-loop methods.

Model Reference Adaptive System encoderless control approaches are becoming prevalent because of their inherent simplicity, efficacy and low computing effort. It is one of several adaptive control methods that may be utilized to estimate state and parameter values. Moreover, it employs two distinct machine models: a reference model and an adjustable or adaptive model, where an adaptive process reduces the error among both models to predict the required physical parameter. Kalman filters are also used as an observer for estimating the speed of non-linear systems. When designing algorithms for extended Kalman filters (EKFs), Kalman and Luenberger noises are taken as a disturbance. The EKF has the benefit of taking modeling flaws, measurement mistakes and inaccuracies into account when estimating the rotor speed across a broad speed range, however, not at zero speed. Kalman filters are also less sensitive to the system's parameter changes. Nonetheless, Kalman filters have disadvantages of lack of tuning criteria and design, reliance on model accuracy and inaccurate machine parameters.

Similarly, there are also artificial intelligence-based encoderless control methods that are utilized to decrease the tuning power of controllers, increase resilience against machine parameter sensitivity and provide high dynamic performance with little computational work. The primary benefit of utilizing artificial intelligence approaches is that they reduce the need for a mathematical model of the drive system and machine, which is reliant on several assumptions and factors that are hard to predict while operating. Sliding mode control is another frequently used technique for controlling electric motors. It is preferred because it exhibits low sensitivity to machine parameters, rejection of external disturbances, superior performance against unmodeled dynamics and the ability to deliver a rapid transient response.

Encoderless control has a number of advantages, including low cost, decreased hardware size and complexity, increased control system resilience and reduced maintenance needs. It enhances the system's noise immunity and minimizes the number of transducer cables. In addition to being reliable, it is also appropriate for a tough climate with fluctuating temperatures.

Encoderless control methods do not need a mechanical sensor for sending feedback signals to control systems. The mechanical sensors are costly, add complexity to the system, have continuous maintenance requirements and are not optimal for handling non-linear systems. However, no such issues exist in encoderless control methods for electric motor drives.