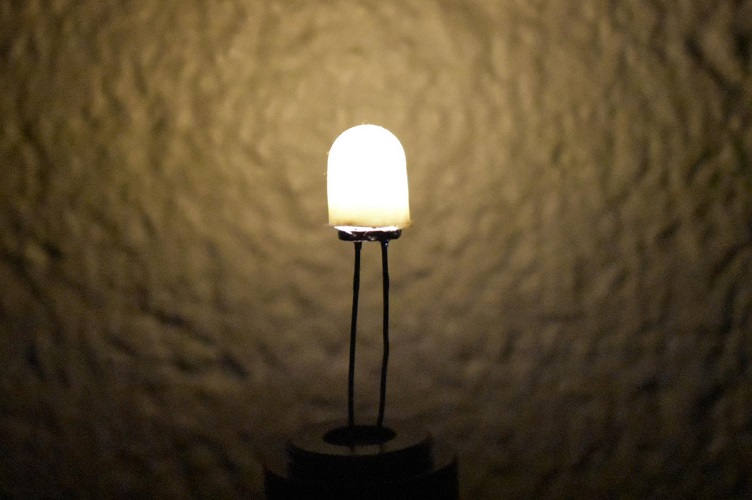 A prototype LED creates a warm white light without blue, which has been known to cause health issues. Source: University of Houston

While light emitting diodes (LEDs) offer longer lifespans than traditional incandescent lights as well as environmental benefits, most LED lights on the market emit blue light, which has been linked to eye troubles and sleep disturbances. Now, the University of Houston has created a prototype luminaire that reduces, instead of masks, the blue component in LEDs, making colors appear as they do in natural sunlight.

Inside a typical LED, a chip converts electrical current into high-energy light, including invisible ultraviolet (UV), violet or blue wavelengths. A cap is placed on the chip containing multiple phosphors that emit a different color and these colors combine to produce a broad-spectrum white light. Commercial bulbs use blue LEDs and yellow-emitting phosphors, which appear as a cold, bright white light like daylight.

Exposure to these blue-tinted lights has been linked to disruption of sleep or even cataract formation. Previously, attempts to create an LED bulb for nighttime only masked the blue hue without getting rid of it.

To create an LED that reduces blue light, the University of Houston identified and synthesized a new luminescent crystalline phosphor containing europium. In testing, the phosphor’s emission color was consistent between room temperature and the higher operating temperature of commercial LED-based lighting.

To see how the material might work in a light bulb, researchers fabricated a prototype device with a violet-light LED covered by a silicone cap containing luminescent blue compound blended with red-emitting and green-emitting phosphors. The result was that the prototype produced a bright warm white light and minimized the intensity of blue light while still maintaining a natural sunlight feel. While this fulfills the need of indoor lighting, researchers said more work is needed before it is ready for everyday use.

The full research can be found in the journal Functional Inorganic Materials and Devices.