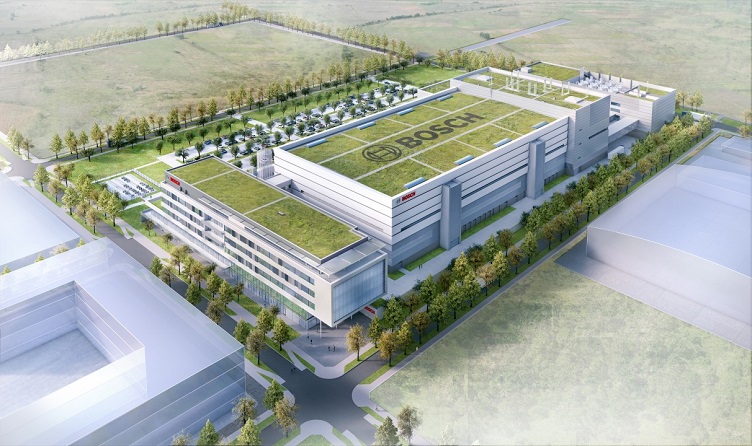 Bosch’s Dresden, Germany facility will focus on building semiconductors for the automotive market and will open in June. Source: Bosch

Bosch plans to open a new semiconductor fab in Dresden, Germany, with a primary focus on automotive chips.

Slated to open the wafer fab in June, Bosch began putting its first wafers through the fabrication process in the Dresden fab in January. From these, the company will make power semiconductors for use in applications such as DC-DC converters in electric and hybrid vehicles.

The semiconductor fab will help the ongoing automotive chip shortage that is gripping the industry due to the outbreak of COVID-19. While it will take Bosch time to get the fab up to running the capacity needed to make a dent in the shortage, it will help the overall market in the long term to potentially avoid such situations in the future. Something that is also being explored by the U.S. government and regulations to boost U.S. domestic chip manufacturing. The Biden Administration last month issued an executive order to explore the reasons for the semiconductor shortage and potential ways to help manufacturers get back to business.

Other companies are also looking to secure more capacity for what is expected to be a compound annual growth rate (CAGR) of 5% in semiconductor manufacturing over the next decade, which will result in a projected boom in fab construction during this same time.

This ramp up in semiconductor manufacturing spending is due to increasing demand for chips across industries including the automotive sector, which is consistently increasing its chip content per vehicle with each new model. But because chips cannot be made overnight, capacity must be gained through the construction of new fabs, expansion of current facilities or migrating capacity from one industry to another, which is a short-term solution.

The COVID-19 pandemic has revealed flaws in the global supply chain with large semiconductor plants in just a handful of locations. As a result, the U.S. is trying to expand the semiconductor industry in the country by proposing a $22.8 billion aid package as part of the National Defense Authorization Act (NDAA). The funding would create a 40% refundable income tax credit for semiconductor equipment, $10 billion in federal funds to match state incentives to build factories and $12 billion in research and development funding.

Globalfoundries (GF) said it will invest $1.4 billion to expand its capacity among its Dresden, Germany, Malta, New York, and Singapore facilities, with a ramp up in output expected through 2022 to produce chips from 12 nm to 90 nm. GF also recently purchased an option agreement for about 66 acres of undeveloped land adjacent to its Fab 8 facility in Malta, New York, and may build an additional facility at that location depending on government incentives.

Prior to the outbreak, Taiwan Semiconductor Manufacturing Corp. (TSMC) said it is building a 5 nm state-of-the-art facility in Arizona and Intel is working with the Semiconductor Industry Association (SIA) and the U.S. government to explore building a new facility in the U.S. or working jointly with other manufacturers for new fabs.

There are also rumors that Samsung is planning to build a new 5 nm fab in Texas over the next five years.

In the six weeks it takes to produce the wafers, some 250 individual fabrication steps are taken, most of which are automated. During the process, minute structures with dimensions measuring fractions of a micrometer are deposited on the wafers. In March, Bosch will start first production runs of the ICs and to make the wafers into finished semiconductor chips, they undergo some 700 processing steps, which take more than 10 weeks to complete.

Bosch is investing about $1.2 billion in the facility with funding being provided by the German government, specifically the Federal Ministry for Economic Affairs and Energy.

The 300 mm fab can accommodate 31,000 chips and will feature fully automated production and real-time data exchange between the machines for production efficiency. Construction of the fab began in June of 2018 and will measure about 100,000 square meters — about the size of 14 soccer fields. In late 2019, the outer shell was completed allowing for 72,000 square meters of floor space. The interior work started in November of 2020 and the final phase of construction will see up to 700 people working in the Dresden fab to control and monitor production and maintain the machinery.