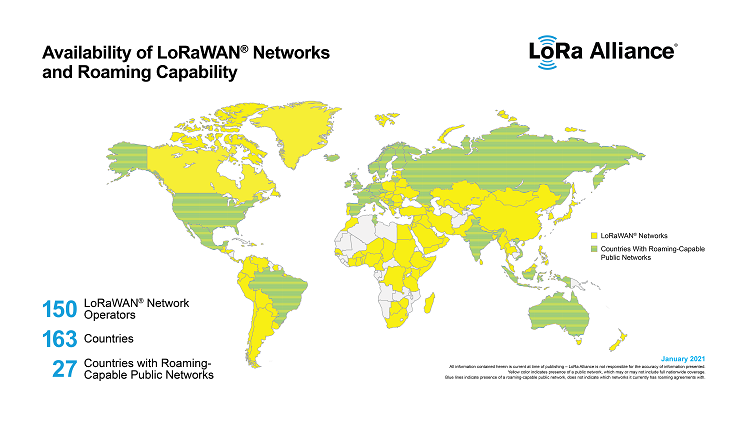 Additionally, the LoRa Alliance has launched its Connect EU initiative to accelerate roaming across Europe. The initiative is geared to encourage collaboration between LoRa Alliance members interested in leveraging LoRaWAN roaming.

“The LoRa Alliance continues to drive a strategy of making LoRaWAN widely accessible and easy to use,” said Donna Moore, CEO and chairwoman of the LoRa Alliance. “As of the end of 2020, we have public and private LoRaWAN networks active in more than 160 countries around the world. We also know that true global coverage is most quickly accomplished by interconnecting networks.”

LoRaWAN roaming covers both mobile and fixed assets where devices leverage the radio coverage from roaming partners in multiple countries. The roaming supports public-to-private and private-to-private network peering. This allows devices to potentially be served simultaneously by several gateways that may belong to its home network and one or more visited networks. This allows several networks’ gateways to act as one, with unified coverage serving the device, LoRa Alliance said.