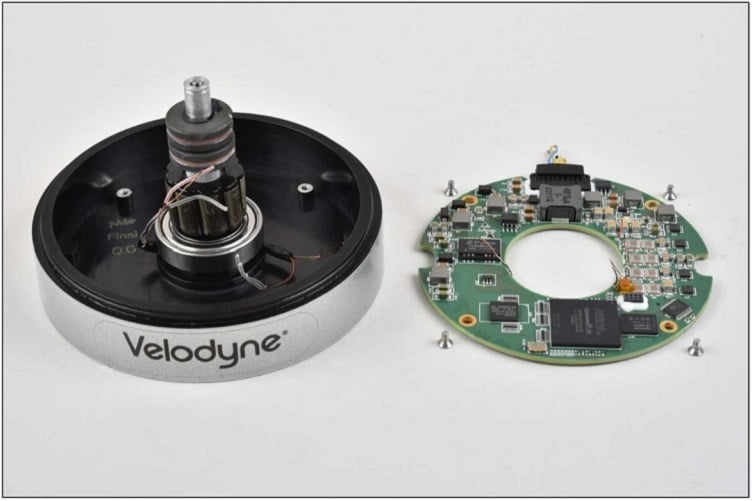 The following is an overview of a teardown analysis conducted by TechInsights.

Lidar is considered a critical component for the development and operation of self-driving vehicles in the automotive market. Short for light detection and ranging, the technology uses lasers to calculate the distance of objects and the light pulses from these lasers generate 3D information about those objects. In the automotive market, lidar relays that information back to a vehicle to avoid obstacles in the road, pedestrians, other cars and create a general sense of the car’s environment.

However, the technology is finding its way into numerous other use cases such as the 3D mapping of interiors, augmented reality, drones, logistics, critical infrastructure and more.

Velodyne is one of the leading manufacturers of lidar, providing its sensors for automotive OEMs developing commercial vehicles and trucks. The Lidar Puck VLP-16 sensor provides high-definition 3D information about the surrounding environment and provides a full 360-degree environmental view of real-time data.

While lidar has been popularized in the automotive market, the compact Puck VLP-16 sensor can be used for mapping, robotics, security, smart cities and more.

The Puck VLP-16 sensor features 16 channels, a measurement range of 100 meters and range accuracy up to 3 centimeters. The following is an overview of a deep dive of the Velodyne Puck VLP-16 lidar from TechInsights. 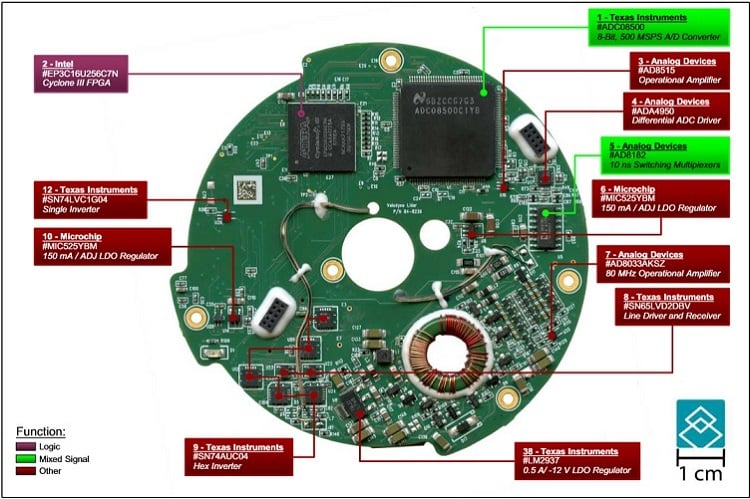 The main board of the Velodyne Puck lidar includes components from Intel, Microchip, ADI and TI. Source: Tech Insights

The main board of the Velodyne Puck lidar is the heart of the device featuring numerous controllers, RF components and switches. On the first side of the main board, resides microcontrollers, inverters, regulators and receivers from Texas Instruments; amplifiers, ADC drivers and switching multiplexers from Analog Devices; regulators from Microchip; and the Intel Cyclone III field programmable gate array (FPGA) processor. TI’s temperature sensor is also a feature of the main board on the Puck lidar.

On the second side of main board resides 8 MB of flash memory from Intel and an Infineon dual MOSFET driver as well as other components from TI, Microchip and ADI.

Intel had the overall design wins for the Puck lidar with four major designs including the two Cyclone III FPGAs and 128 MB and 8 MB flash. 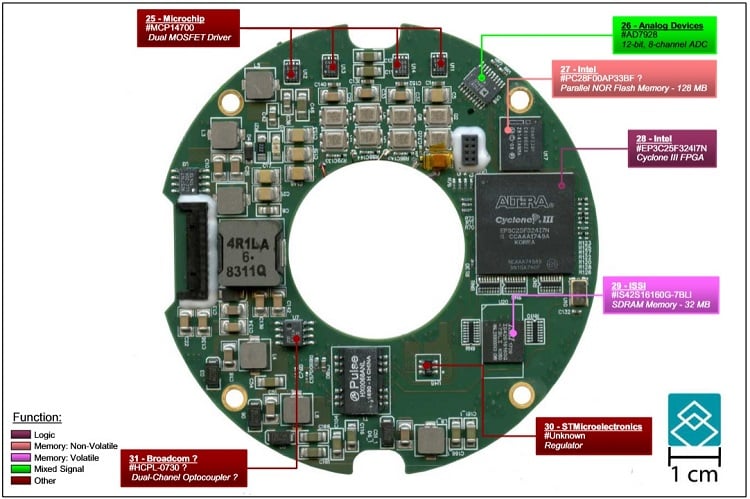 On the front side of the Velodyne Puck lidar power board resides the second Intel Cyclone III FPGA and parallel 128 MB of NOR flash memory; 32 MB of SDRAM memory from ISSI; a regulator from STMicroelectronics; ADC and MOSFET driver from Microchip; a dual channel optocoupler from Broadcom; and a Hall effect sensor from Allegro Microsystems.