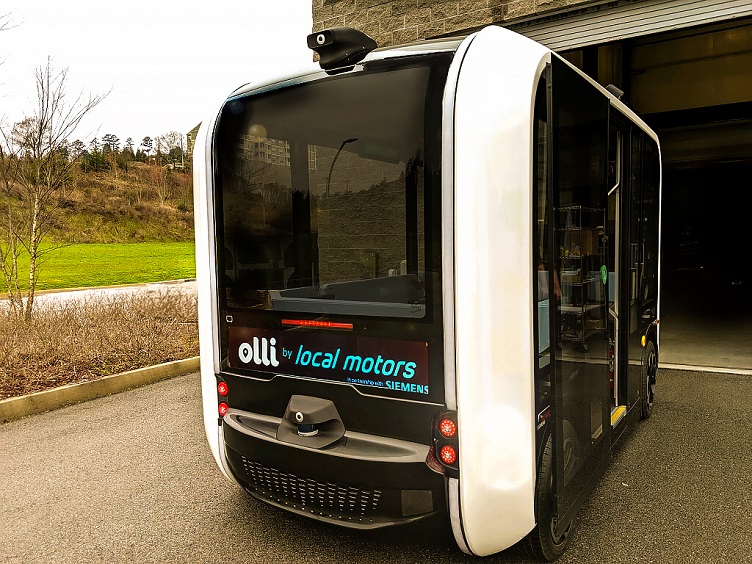 The Olli autonomous shuttle will include even more lidar systems than previous verisions after a new deal with Velodyne. Source: Local Motors

Velodyne, a maker of lidar systems, has signed an agreement with Local Motors, a self-driving vehicle startup, to provide additional lidar sensors into its Olli, 3D-printed, electric, autonomous shuttles.

The Puck lidar helps Olli eliminate blind spots as it navigates, giving the shuttle a 360° surround view of its environment for safer navigation on roadways and identifying obstacles. The Puck lidar provides computer perception data allowing vehicles to make quick 3D maps for navigation. The surround view image measures and analyzes an environment, giving vehicles the ability to make decisions in real-time about where to proceed on the roads.

The Velarray H800 lidar is a solid-state sensor designed for advanced driver assistance systems (ADAS) and autonomous applications. The H800 provides long-range vision combined with a wide horizontal field of view (FOV) detecting objects early enough for vehicles to stop at safe distances in urban driving and avoid collisions on curves and turns.

Local Motor’s Olli shuttle is a connector for multimodal transportation networks, providing first-mile and last-mile solutions for transportation gaps or new transportation projects. Earlier this year, Beep collaborated with Local Motors to expand Beep’s public and private road testing for the Olli vehicle and will work together to expand the operating domain for the multi-passenger, self-driving vehicles in a shared program with the National Highway Traffic Safety Administration (NHTSA). The first deployment of the Olli was to Jacksonville’s Transportation Authority’s Test & Learn Program, which was the first deployment in the U.S. Local Motors and Beep plans to deploy hundreds of autonomous vehicles across the country in the coming years.