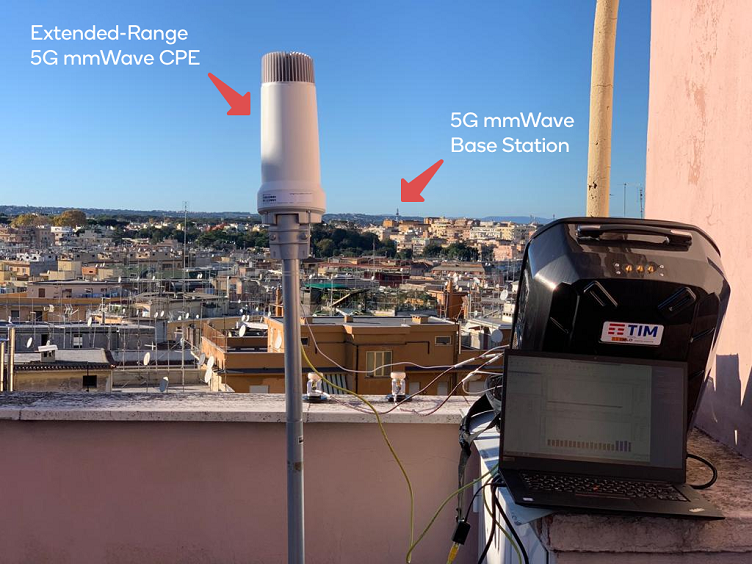 The test using extended range CPE and base station for the record in long distance 5G mmWave connection. Source: Qualcomm

A new record for 5G millimeter wave (mmWave) has been achieved by Telecom Italia Mobile (TIM), Ericsson and Qualcomm Technologies after achieving a speed of 1 Gbps on 26 GHz frequencies of a distance of 6.5 kilometers (4 miles) on a fixed wireless access (FWA) network.

Generally, 5G mmWave is considered “true 5G” to meet the speeds expected from the next generation wireless technology — 10 times the speed, higher bandwidth and lower latency than 4G. However, the technology is problematic in that it does not travel far in its current form, especially indoors. The higher frequency transmissions are interrupted while traveling between obstacles such as trees, buildings or walls, disconnecting the service from the user. While sub-6 GHz technology is able to flow through obstacles easier, it does not have the ability to generate the speeds promised by 5G.

The companies said that this test confirms that 5G mmWave spectrum could be used for urban, high speed or high-density-only deployments but also for wider 5G FWA coverage.

FWA is seen as one of the first use cases that will emerge from 5G outside of cellular to consumers. The technology will serve as a replacement, or alternative, to broadband fiber, cable and DSL. mmWave is thought to allow FWA to match or even outpace current broadband bandwidth. FWA could also bring broadband services to remote areas where nothing exists or to places where broadband is extremely limited.

For TIM, the company will use mmWave to enhance ultra-broadband connections, especially in areas not covered by fiber. The company is working toward new 5G FWA solutions, also known as Fiber to the Air, as a widespread and efficient broadband option for Italy.

The companies plan to test the solution in the town of Front, Italy, in the Canavese area of the province of Turin. The area does not have connectivity yet and the 5G mmWave site will equip a high-capacity radio link connection to allow users to try out the FWA multi-gigabit per second speeds. TIM said it will roll out the technology to other industrial districts in the following months as more businesses are identified.

Numerous companies have been testing mmWave technology to expand its coverage and improve the technology’s ability to penetrate obstacles. Verizon and Qualcomm have both established testing sites to improve coverage of 5G mmWave indoors for possible use in hospitals, factories, warehouses, schools, ports, retail stores and more