What is an underactuated robot?

Few robots inevitably have the properties of the underactuated systems, whereas others are specially made in such a way. This is probably to avoid the high cost of actuators. For example, an inverted pendulum or cart and pendulum is a system of underactuated robots. The degrees of freedom of such a system are two, which is the pendulum angle and the linear cart position, and the number of actuators is one, as represented by the cart acceleration. A car is another example of underactuated robots. The degrees of freedom of a car are, at minimum, three: two-position variables x and y, and one chassis orientation angle. On the other hand, a car has two control inputs such as forward or backward speed and steering speed. Moreover, if the rolling or steering wheels’ angles are also taken into account, the number of degrees of freedom of a car would be even greater. 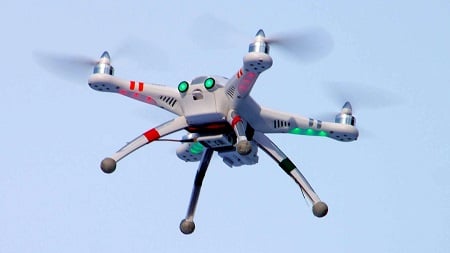 The quadcopter is an example of an underactuated robot. Source: Creative Commons Licenseconfiguration — roll, pitch, x position, y position, z position and yaw. Meanwhile there are four control inputs — four currents that move its four propellers. In a walking robot, when the robot makes a move with the toes of one foot on the ground, and the other whole foot in the air, no control input is present at the toes to monitor the angle directly between the ground and the foot.

Consider an underactuated robot hand, which typically has many joints, with a maximum of 4 for every finger on an inanimate hand. For reducing expenses, fewer motors (a minimum of one) can be utilized to close and open the fingers, and springs can be used to couple the joint motions. In systems manipulating robots, when the hand and robotic arm handles a stiff object, the whole system considered together would have six more degrees of freedom of the object at a minimum than the control inputs.

Reasons for properties of underactuated robots

Underactuated robots can achieve more degrees of freedom than control input because of three main reasons. The first one is system dynamics. In a given environment, the system mechanics have a smaller number of drivers in order to achieve a given task, such as a helicopter, spacecraft and underwater ships. To build some other systems and to increase the system's flexibility and minimize costs, the drivers need to be minimized artificially, for example, in flexible-link robots and two propeller satellites. For simulating space applications, flexible-link robots are a crucial type of underactuated mechanical systems.

The second reason is that they are intentionally designed to build complicated nonlinear systems for awareness of control and robotics. An IP system is an underactuated reference system that is typically divided into various types, such as a rotary pendulum system, or a first-, second- or other higher-order IP system. The most crucial and popular type is the first-order IP system. This IP system is also called the vehicle pendulum system. It is also being popularly researched in areas of civil engineering and aerospace. For instance, IP systems can be used in the seismic structure of high-rise buildings and upright rocket system control.

The second-order IP systems can be classified into two categories based on various driving joints (Pendubot and Acrobot). The Pendubot is a short form of pendulum robot that is a mechatronic system that is made up of two stiff links joined by revolute joints. DC motors control one joint and the other one is not controlled. Therefore, a simple pendulum represents the second joint that is controlled by the first joint's actuation. On the other hand, the Acrobot's second-order IP systems are made up of two links and two joints, wherein an input controls the joint among the two links. At the beginning of such systems, the links hang down, and the aim is to raise the lower link to a certain desired height. Moreover, Japanese Fukuta for the first time proposed the rotating IP system, therefore, it is also called a Fukuta IP system. A motor derives its flat drive arm and the cantilever that must be inverted is an underactuated system. The third reason for such characteristics of underactuated robots is the actuator faults.