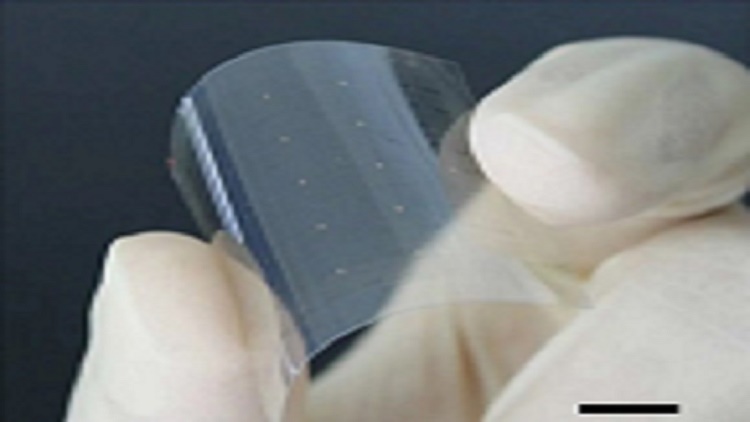 A flexible printed circuit board.

In the last decades, the field of flexible electronics has grown rapidly with innovative new applications including e-textiles, wearable electronics, sensitive electronic skins, transparent and automated patch-like networks, along with transient and imperceptible implants for medical. The ability to transform daily life through such devices has fostered a hunt for electronic devices that produce high electrical and mechanical outputs and that are transparent, lightweight, stretchable, flexible and even biodegradable at the same time.

Flexible thin-film transistors (TFT) will meet all these constraints, and are thus deemed the most exciting electronic technologies for the future.

TFTs are three-terminal field-effect devices that work similarly to those used in traditional silicon (Si) electronics, such as metal oxide semiconductor field-effect transistors (MOSFET). But the substratum in MOSFET technology is a single crystal Si wafer, which also depicts the active layer. The system functionality is applied through numerous high temperature (over 1,000° C), complex and costly operations, for example, dopant diffusion/implant, etching and lithography. On the contrary, TFTs are generally made on insulating materials such as glass and plastic, over which all layers of components are developed at temperatures lower than 650° C by solution, or vacuum, processing deposition methods.

Given the various production processes, the active TFT layers are usually made up of polycrystalline or amorphous material, both of which are distinguished by lower charge carrier movements as opposed to single Si crystal. As with MOSFETs, TFT operation is accomplished using a dielectric sheet placed between the semiconductor and a crosswise gate connection, along with two directly connected to the semiconductor's source/drain electrodes. The modulation of current between source/drain is accomplished through the semiconductive layer by a capacitive dose of charge carriers near the semiconductor interface, which is also known as field-effect. Though both TFTs and MOSFETs depend on field-effect, in TFTs, it is accomplished by an accumulation layer and not an inversion area such as in MOSFETs.

Currently, two types of metal oxide semiconductor (MOS) materials are being used to make active layers of flexible TFTs. The first one is vacuum-processed MOS, and in this category, amorphous IGZO is the most commonly used material. The second category is solution-processed MOSs, which mostly include crystalline ZnO and In2O3. Moreover, flexible metal oxide TFTs are available in both n- and p-type configurations.

One of the main reasons why flexible TFTs have gained attention is their electrical efficiency that is greater than other Si-based and organic-based flexible TFT systems. The other reason for its popularity is related to its mechanical properties. For example, the mechanical properties of flexible n-type TFT based on vacuum-processed MO need to be thoroughly explored with problems such as maximum strain resistance, induced strain, mechanical fatigue function and effects of strain on electrical performance.

For inducing strain in flexible TFTs, bending is often used. TFTs with minimum bending radius in the regime of centimeter is suitable for applications such as embedded patch-like systems, smart labels, and rollable displays. However, smart textiles or e-textiles need bending radius in the sub-millimeter range, and TFTs for medical must have a bending radius according to human body parts.

For example, human hair has approximately 50 micron radius. The bendability of the device can be increased by either reducing the bending mechanical strain or enhancing the flexibility of TFT. In general, TFT flexibility can be enhanced by increasing the ductility of various layers, for example, increasing the ductility of the gate. Another useful strategy is to use ductile polymers rather than brittle ceramic dielectrics for the gate, for example, Al2O3.

It is also necessary to predict the behavior of flexible TFT before manufacturing. The simulation of the device is not only important when developing and simulating full circuits, but it also enables the modeling of the effect of TFT scaling and any adjustment of the device structure. Currently, flexible TFTs have been designed based on their current-voltage characteristics. For such purpose, machine learning-based techniques such as least squares-support vector machine (LS-SVM), radial basis functions (RBF) and multi-layer perceptron (MLP) are used. MLP is by far the most feasible method of these methods because it offers the best balance between complexity and accuracy.

Transparency is also an important prerequisite for the seamless integration of electronic equipment into everyday objects, especially for applications like intelligent glasses or electronic windshields. The metal oxide TFTs are suitable for realizing transparent devices given the inherent clarity of the active layer and almost all-accessible dielectric gate. For a fully transparent device, translucent conductors must also be used rather than the metallic gate, source and drain contacts. To produce transparent conductors, ITO is perhaps the material that is commonly utilized. However, this has the potential to decrease the bendability of TFTs.

Another interesting application, wireless transmission system, is using a rectifier circuit, source, and receiver coils, based on TFTs arranged in a diode-load configuration, in which gate-drain terminals are shorted. The sensor systems are using flexible TFTs for sensing temperature, biochemicals and images. Apart from these applications, disposable and inexpensive data transmission systems are using flexible TFTs for developing transparent and flexible NFC or RFID tags. They can be easily integrated into water packages, food, windows, mirrors or even books.