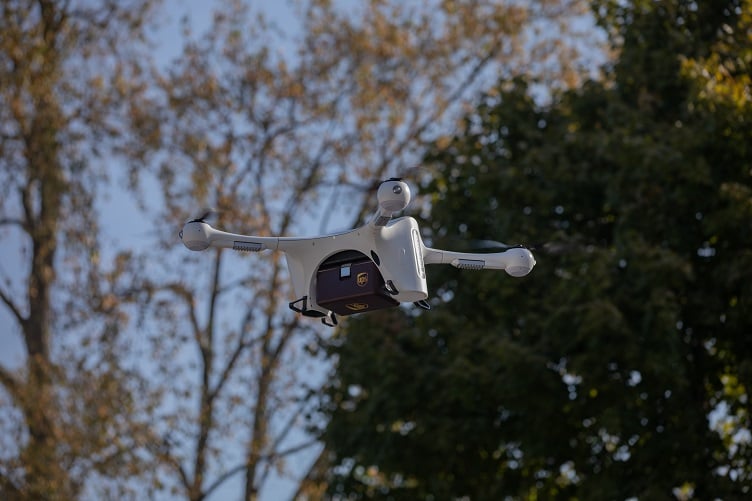 The drone used in the UPS flight prior to receiving full FAA approval. Source: UPS

UPS’ subsidiary UPS Flight Forward Inc. has received what it claims is the first full certification to operate a drone airline, enabling the company to regularly fly unmanned aerial vehicles (UAVs) beyond the visual line of sight (BVLOS).

After receiving certification, UPS said it will expand its drone delivery service not just for healthcare but into other areas such as consumer last-mile package delivery. It will also use drones for goods delivery to marine vehicles and to customers in other industries.

The approval from the U.S. Federal Aviation Administration (FAA) comes just a few months after UPS created the Flight Forward subsidiary with the goal of gaining FAA approval for operations beyond line of sight, at night and with an unlimited number of drones and operators in command.

As part of the FAA’s Part 135 standard certification for drones, Flight Forward already conducted a flight at WakeMed’s hospital campus in Raleigh, North Carolina. The flight, which UPS completed earlier this year, used an M2 quadcopter from drone maker Matternet that was flown under government exemption for BVLOS operation, which UPS claims is the first regular revenue-generating delivery.

“Our technology is opening doors for UPS and solving problems in unique ways for our customers,” said David Abney, UPS chief executive officer, in a statement. “We will soon announce other steps to build out our infrastructure, expand services for healthcare customers and put drones to new uses in the future.”

UPS said it will build on this type of delivery in order to expand the delivery of healthcare items that will help with critical care or lifesaving applications.

UPS’ long-term plan for Flight Forward includes expanding service to hospital and medical campuses around the U.S. and a build-out of ground-based, detect-and-avoid (DAA) technologies for drone safety. Other plans include constructing the centralized operations control center for drone operations, regular and frequent BVLOS flights and partnerships with other drone makers to build new drones with various cargo capacities for the transport of special commodities and other regulated goods.