The annual World Robotics report from the International Federation of Robotics (IFR), has just been released for 2019. Below are some of the takeaways.

Robots set a record in terms of global sales value. In 2018, global sales value stood at $16.5 billion and global shipments exceeded 400,000 units for the first time. With a total of 422,000 units, the number represents a 6% increase from the previous year. IFR forecasts that 2019 shipments will recede from this record level — but also that 2020-22 will see an average growth of 12% per year. The report notes that the value represents only robots; including software, peripherals and systems engineering raises the value to approximately $50 billion. 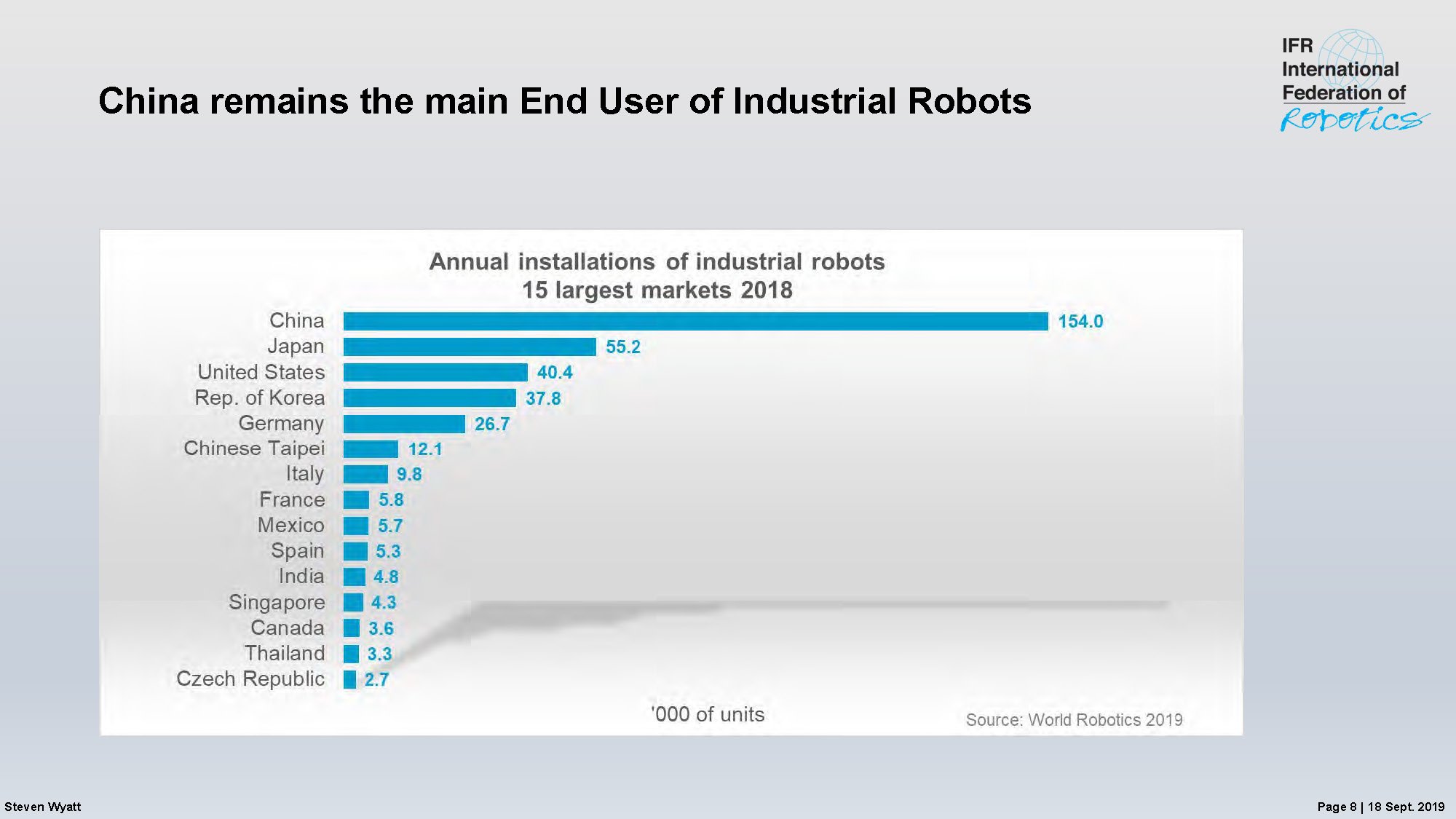 China is still on top — by a wide margin. Source: IFR

China remains the world’s largest industrial robot market. The country has a 36% share of total installations worldwide; although installations in China declined by 1% in 2018, more were installed there (154,000 units) than in both Europe and the Americas combined.

Japan reaches its highest value ever. The country has increased sales by 21% to an all-time high of about 55,000 units. In terms of manufacturing, Japan is number one in the world; it delivered 52% of the global supply in 2018. The report notes that Japan’s average annual growth rate of 17% since 2013 is “remarkable for a market with an already highly automated industrial production.”

Europe and the Americas reaches new growth rate peaks. Although the largest industrial robot market is Asia, its growth rate overall was only 1% in 2018. Europe, the second-largest market, increased robot installations by 14%; the Americas increased by 20%. Both regions have marked new record levels for the sixth year in a row.

Automotive a strong driver for Germany. Germany is the largest robot market in Europe and the fifth-largest in the world. Installations are mainly driven by the automotive industry; worldwide, the industry holds an almost 30% share of the total supply. Robots sold in Germany saw a 26% increase in 2018, a new record. 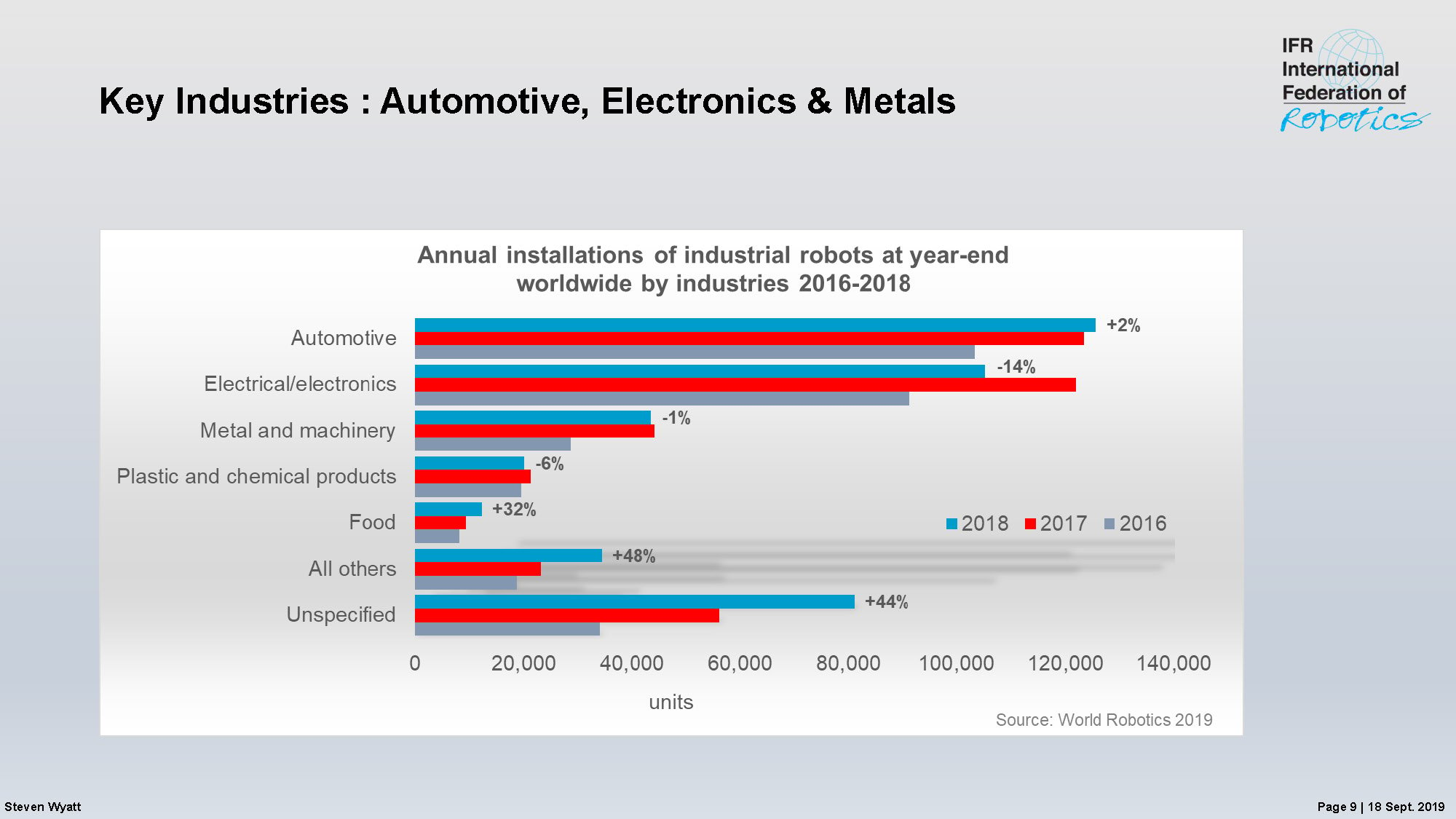 Electronics industry underperforms. Global demand for electronic devices and components substantially decreased in 2018; the report notes that the electrical/electronics industry is probably the one most affected by the U.S.-China trade crisis. Although originally on track to replace the number one industry, automotive, installations declined by 14% from 2017-18. The majority (79%) of installations were in China, the Republic of Korea and Japan — three countries with major production sites.

Metal and machinery comes in third. Producers of both non-automotive metal products and industrial machinery have bought substantial amounts of robots in recent years, bringing this segment into third place behind automotive and electrical/electronics. The industry is number one in numerous European markets, ranging from Finland (44%) to Denmark (21%).

Cobots on the radar. For the first time, the report includes an analysis on the market for collaborative robots, also known as cobots. The devices are designed to perform tasks in the same workspace as human workers. The number of units installed is still very low, with a share of just 3.24%; however, annual installations increased by 23% from 2017-18.

The full World Robotics report for 2019 can be accessed here.