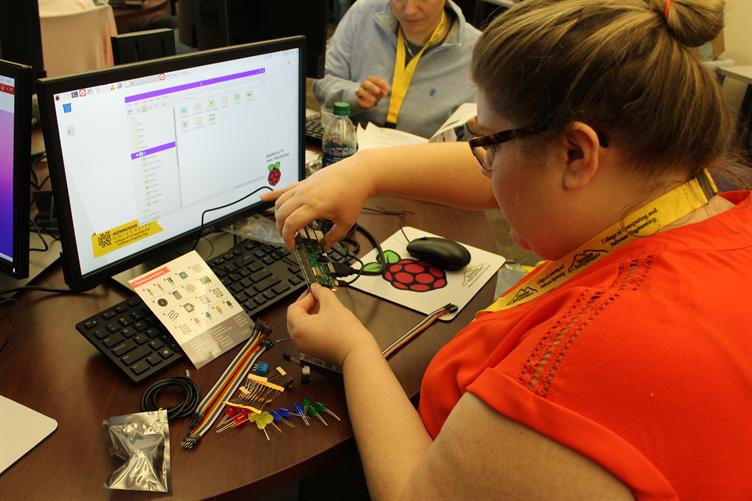 After retiring from teaching computing at the university level in 2017, Bob Brown, Ph.D., decided to return in a new capacity: as a Raspberry Pi Certified Educator, focused on providing classroom experiences for students in grades K-12.

“I was amazed at the excitement and creativity that Picademy and the Raspberry Pi created among the teachers who attended,” he said. “After reading about the number of applicants for limited Picademy positions, I realized there was unmet demand. I began to wonder whether we could do something similar at the CCSE.”

The CCSE is the university’s college of computing and software engineering, of which Brown is an official representative. After raising more than $2,000 from alumni and spending over 100 hours developing instructional materials, Brown conducted a pilot program for teachers in the fall of 2018. Participants were given a Raspberry Pi 3B+ and a parts pack.

The dean of CCSE, John Preston, Ph.D., was impressed. He authorized a formal fundraising program and two additional workshops in the spring of 2019, with four more workshops scheduled for summer.

“Given the price and power of the Raspberry Pi computers, these devices are a perfect match for our project in the local schools,” Preston said.

The Raspberry Pi Teachers’ Workshops have become a regular part of CCSE’s outreach efforts. Support from individual gifts and grants from insurance provider State Farm and 3M Corporation are key to the free workshops. Teachers have been attracted to the program from all over Georgia and as far away as Mississippi. For some of them, the program offers a first experience at exploring the concept of physical computing. The hands-on approach helps them set their own pace. Individual support is also provided by college students who serve as facilitators.

Workshop participants also take home a Raspberry Pi, extra components and parts, and they can continue to exchange ideas and support through an online forum. By the end of summer, more than 150 K-12 teachers will have participated.

“Teacher workshops have a multiplier effect,” Brown noted. “If I teach 30 students, I’ve reached 30 students; if I teach 30 teachers, I potentially reach thousands of students over a period of years.”