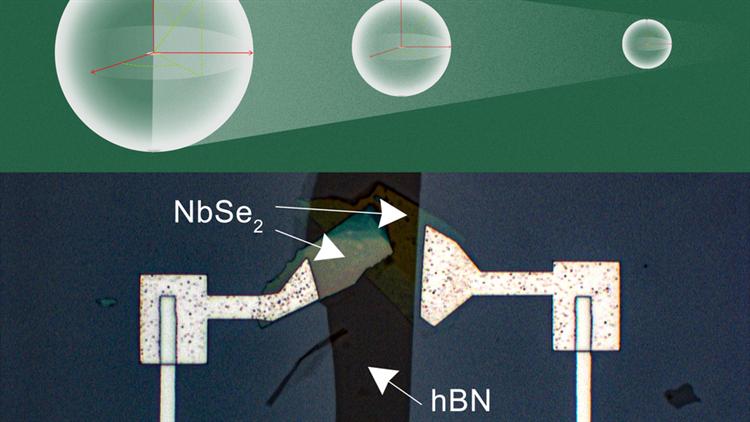 MIT researchers used the 2D material hexagonal boron nitride to build much smaller capacitors for superconducting qubits, enabling them to shrink the footprint of a qubit by two orders of magnitude without sacrificing performance. Source: MIT/CC BY-NC-ND 4.0

Researchers at MIT have developed a new way of creating extremely small superconducting qubits using ultra-thin materials. These qubits are one-hundredth the size of normal qubits and experience less interference between other near qubits. This new technology can improve the performance of quantum computers and speed the development of miniature quantum devices.

These researchers have found that hexagonal boron nitride, a material that has just a few monolayers of atoms, can be laid on top of itself to create an insulator for the capacitors that live in a superconducting qubit. This material is also defect-free, which allows the capacitors to be much smaller than those that are typically used for this application. This in turn shrinks the size of the qubit itself.

Furthermore, the structure that the smaller capacitors exhibit should greatly reduce any “cross-talk”, which is interference between qubits and other qubits that immediately surround it.

Currently, there can be from 50 to 100 qubits in a device, but for necessary technological advancement in the coming years, it is safe to say that thousands or millions of qubits within a device will be needed. That is why it is imperative that these qubits reduce significantly in size, while also reducing any interference between qubits, as there will be such an increased number of them in a device in the future. Fortunately, MIT researchers have found “one of the very few” materials that can make this possible.

Superconducting qubits are a specific type of quantum computing platform that utilize superconducting circuits, which give them their name. These circuits contain capacitors and inductors, where similar to electronic devices like radios, the capacitors are what store the electric field energy. Capacitors are typically built like a sandwich, with an insulating (or dielectric) material between two metal plates.

Superconducting quantum computers are different from radios, however, as they operate at extremely low temperatures, around -273.15° C. They also have super high-frequency fields, which is more like today’s smartphones. The vast majority of insulating materials that work under these conditions contain defects. This can hinder the operation of quantum devices, as the quantum-coherent information can get absorbed or lost by these defects.

The typical dielectrics that are used for integrated circuits are silicon nitrides or silicon oxides. Both of these have significant defects, which have quality factors in the 500 to 1,000 range. This loss is too much for quantum computing applications. To counteract this, traditional qubit capacitors are constructed like an open-faced sandwich, featuring no top plate and utilizing a vacuum as the insulating layer. This has an effect on the electric field as well, because the plates that are used are much thicker and the vacuum layer is also thicker, and this dilutes the electric field. The open faces also give way to a lot of interference, as each qubit has its electric field open to free space.

This is a complex process and involved creating one-atom-thick layers of all of the materials using a microscope and then utilizing a sticky polymer to stick the layers together once stacked on top of one another. Once this was completed, the construction of sticky polymer and 2D materials was placed onto the qubit circuit, and the polymer was melted away. The qubit was then connected to the capacitor and was cooled to 20 millikelvins or -273.13° C.

One of the main challenges of creating the 2D structure was handling niobium diselenide, which oxidizes in seconds when it comes into contact with air. To make sure this didn’t happen, the construction of the 2D structure was carried out in a box filled with argon, an inert gas that has a very low percentage of oxygen. This box is known as the glove box as everything within the box is done with special gloves on.

As mentioned previously, the qubit that is created using this new capacitor is roughly 100 times smaller than previous designs on the same chip. The lifetime (or coherence) of the new qubit is just a couple of microseconds shorter than before. Cross-talk will be reduced due to the new capacitors containing more than 90% of the electrical field between the two plates.

This method paves the way for researchers to build many more qubits on a chip to confirm that this new design and technique does reduce cross-talk. By fine-tuning the design in the future, they also hope to improve the performance of the qubit and even construct the entire qubit out of the aforementioned 2D materials.

This new design also gives peace of mind to researchers looking to use hexagonal boron nitride for their designs in the future, as it is now proven that it has little to no defects. New opportunities will come from this as many different kinds of heterostructures can now be made, and they can be combined with microwave circuits to create an abundance of new possibilities. This material can be used in many ways without the concern of losses associated with the dielectric.