5G Will be Adopted Faster than Any Previous Cellular Technology 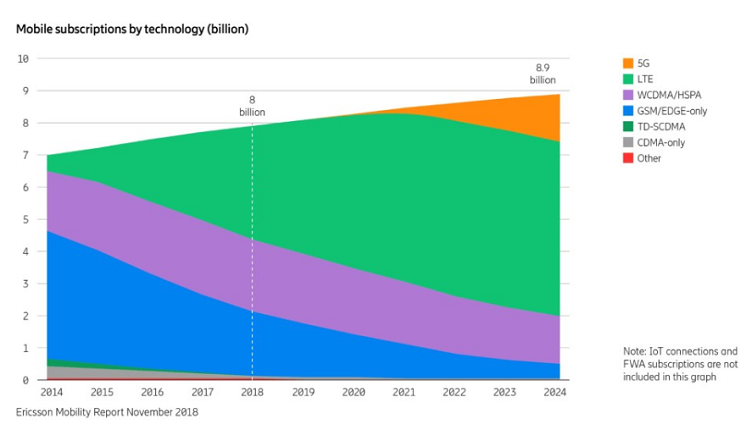 The move to 5G is underway, and while the market won’t truly accelerate until years from now, there are infrastructure testing and equipment rollouts happening on a global scale in preparation for future demand.

In fact, 5G adoption may occur so rapidly that it will become the fastest generation of cellular technology to be rolled out on a global scale, according to a new report from Ericsson. This means 40% global population coverage and 1.5 billion subscriptions for enhanced mobile broadband by the end of 2024.

Some of these subscriptions are already available. Verizon introduced its first commercial 5G broadband internet service in October to a handful of cities, although access to the service remains extremely limited. All four of the U.S. major service providers — T-Mobile, AT&T, Sprint and Verizon — have publicly stated that they will begin offering 5G services in 2019.

Significant 5G subscriptions are also expected to come from South Korea, Japan and China in 2019, Ericsson said. Europe will ramp up subscriptions in 2019, growing to account for some 30% of mobile subscriptions by the end of 2024.

“As 5G now hits the market, its coverage build-out and uptake in subscriptions are projected to be faster than for previous generations,” said Fredrik Jejdling, executive vice president and head of business area networks at Ericsson. “At the same time, cellular IoT continues to grow strongly. What we are seeing is the start of fundamental changes that will impact not just the consumer market but many industries.”

5G technology is expected to bring a number of new uses to the mobile market, as well as increase network capacity and lower cost per gigabyte.

T-Mobile recently completed a 5G data transmission on a low-band spectrum, while Chinese smartphone vendor Oppo paired its R15 smartphone with its own 5G network to access the internet. Meanwhile, market research firm IDC reported that the 5G infrastructure market will grow to $26 billion by 2022, up from $528 million in 2018, as the technology accelerates. U.K. telecom operator Three recently completed a number of infrastructure investments, investing $2.6 billion to meet demand, including in a super-high-capacity dark fiber network that connects 20 energy efficient and highly secure data centers.