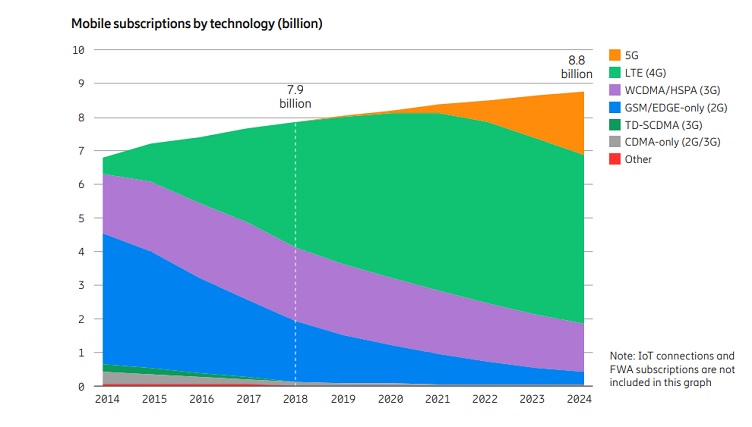 5G is set for explosive growth starting in 2020. Source: Ericsson

As a result of early momentum and enthusiasm, the forecast for 5G has increased with Ericsson suggesting about 1.9 billion 5G mobile broadband subscriptions will be active by 2024.

This is an increase of about 400 million from Ericsson’s previous forecast for 5G mobile broadband subscriptions from November 2018. The forecast increase is the result of several regions switching on 5G networks and introducing 5G-compatible smartphones. Some communication providers have the goal of reaching up to 90% of the population coverage by the end of the year with 10 million 5G subscriptions projected worldwide.

In the next five years, 5G subscriptions will see a significant uptick as network deployments ramp up in 2020, creating a massive adoption of 5G subscriptions. Most of these will be customers trading 4G handsets for 5G-compatible devices with many early adopters and younger users in mature markets getting a 5G smartphone, Ericsson said.

"5G is definitely taking off and at a rapid pace. This reflects the service providers' and consumers' enthusiasm for the technology,” said Fredrik Jejdling, executive vice president and head of networks at Ericsson. “5G will have positive impact on people's lives and businesses, realizing gains beyond the IoT and the Fourth Industrial Revolution. However, the full benefits of 5G can only be reaped with the establishment of a solid ecosystem in which technology, regulatory, security, and industry partners all have a part to play."

In terms of mobile data traffic, in the first quarter of 2019 Ericsson recorded an 82% year-on-year jump and data traffic will continue to soar to reach 131 exabytes per month by the end of 2024, with 35% of this data coming from 5G networks.

In terms of network deployment, LTE networks continue to be built with the global population coverage about 75% at the end of 2018 and is forecast to reach around 90% in 2024. LTE networks are evolving to deliver increased capacity and faster speeds. Additionally, 5G network build-out comes in three categories: radio deployments in the sub-6 GHz range; millimeter wave band deployments; and deployments in the existing LTE bands (non-standalone networks).

The first two 5G networks are expected to cover about 45% of the global population by 2024 with the third category to experience rapid increases as new software is installed for spectrum sharing between LTE and 5G in the low- and mid-bands.

Given the hybrid non-standalone network deployment, Ericsson believes a potential of about 65% of population coverage is possible in 2024.

Learn more about Ericsson’s finding with its Mobility Report June 2019.