Researchers from the University of Connecticut have created a tiny neuro-controller that would allow operators to control the movement of cockroaches as they navigate natural disaster areas. 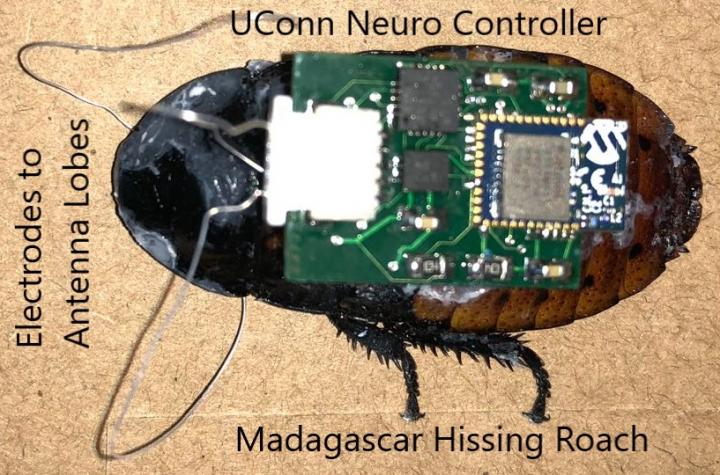 A tiny neuro controller developed by researchers at the University of Connecticut could provide more precise operation of micro biorobots, such as those being tested on 'cyborg' cockroaches for possible use in search and rescue missions inside collapsed buildings. (Source: Image courtesy of Abhishek Dutta/UConn.)

Biobots using technology and live, tiny insects have been tested for use during search and rescue missions. But while the kind of technology has come a long way in the last ten years, there are still a lot of challenges it faces. It has been difficult to integrate electronic hardware with the insect’s biological nerve tissue.

The newly developed microcontroller from UConn researchers attempts to overcome these challenges. The microcontroller is a mini “backpack” attached to the insect with wire attached to its antennae. These wires sent electrical charges to the insect’s neural tissue to signal the insect to move left or right but tricking it into thinking it is in front of an object. When an electrical signal is sent to the right antennae, the insect moves to the left and vice versa.

The new control is unique because it controls the insect with four-channel micro-circuitry. This provides real-time feedback of the neural-muscular response to the charge, making it easier to control the movement.

"The use of insects as platforms for small robots has an incredible number of useful applications from search and rescue to national defense," says Abhishek Dutta, an assistant professor of electrical and computer engineering at UConn, who developed the circuit along with an undergraduate researcher in his lab, Evan Faulkner. "We believe our microcircuit provides a more sophisticated and reliable control system that brings us one step closer to real world implementation of this technology."

The new technology has a nine-axis inertial measurement unit in the backpack device. The unit tracks the insect’s linear and rotational acceleration, identified compass heading, and detects the ambient temperature of the insect. Ambient temperature detection is important because the temperature could have an impact on the way the insect performs and reacts to the electrical pulses.

The information gathered by the micro-circuit is transmitted back to the researcher through a tiny Bluetooth antenna that is placed in the backpack. This small signal is strong enough to be detected by any cell phone. Once the researchers gather the data, they can figure out the best method to control the insect’s path by finding what levels of stimuli needs to be applied.

The team tested the controller on a Madagascar Hissing cockroach in the lab. They found the device to be successful, but the electrical charges were less effective over time. The cockroach’s movements became less intense with every electrical charge sent to it.