IBM and the Veridium Foundation have teamed up to apply blockchain technology to tokenize carbon offset credits.

Veridium looks to apply blockchain by embedding each token, called Verde, with an emissions offset capacity (EOC). Verde is built on the Stellar blockchain, and the Veridium ecosystem as a whole is a collaboration between Veridium, EcoSmart Labs, Brian Kelly Capital Management, IDEAcarbon, Everland CBL Markets and IBM.

According to Veridium, each token could be considered a battery that discharges a portion of its EOC as each token is used in a what it calls an EcoSmart-Trade. IBM is providing expertise in industry-specific blockchain applications, starting with oil and gas.

Carbon offset credits are used by companies and governments to compensate for emitted carbon dioxide. They are purchased or traded, and the investment goes toward reducing emissions some other way, such as renewable energy production. The process is fragmented, however, and some credits lose value over time. 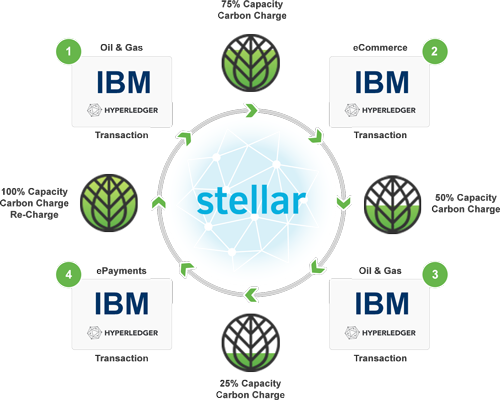 The cumbersome carbon credit process is ripe for efficiency improvements, which could be imparted by blockchain transactions. Carbon offset credits have previously focused on addressing emissions issues at the point of production, but Veridium’s solution could shift the focus to the point of consumption, eliminating wasted time and resources along the way.

Through a set of EcoSmart-Protocols™, Veridium’s founding members have engineered environmental impact mitigation directly into the EcoSmart-Offset Token itself.

In May, Veridium published a white paper describing the technical details of Verde’s application to carbon offset credits.

IBM is continuing to increase its presence in the blockchain space. On July 17, the company announced the launch of a research center dedicated to innovation in blockchain technology and data transparency.