Blockchain technologies like cryptocurrencies recently made a leap into the public eye. The price of bitcoin, the most popular and valuable cryptocurrency, shattered the $10,000 mark on November 28, and after a few days of volatility, it is now generally trading above $11,000. On November 29, Bloomberg reported that NASDAQ will likely become the third exchange to trade in bitcoin futures, possibly as early as Q2 2018.

Many blockchain advocates believe the technology can be used to circumvent trust in a centralized agency, making for more efficient, streamlined transactions that are not bogged down in bureaucratic processes. Blockchain technologies can and have been applied to innovative uses, but some commentators see them becoming a much more foundational technology, raising questions about trust and security.

While most people equate blockchain with cryptocurrencies like bitcoin, it can apply to any transaction between two individuals or parties. A blockchain is simply a digital ledger used to record and verify transactions across more than one computer. A hash function protects the data, allowing stakeholders to verify that transactions have taken place but makes it difficult for them to discover precise details about the transactions. Changing an existing block is nearly impossible because all subsequent blocks must also be changed after determining a unique key that may number in the hundreds of bits.

(For more about the basics of blockchain and bitcoin, read Bitcoin — The App That Made Blockchain Famous.)

Blockchain is most frequently used in cryptocurrency applications because the security inherent in the ledger effectively does away with the need for regulation outside the ledger itself. Bitcoin has gained traction in part due to its introduction just before several severe global financial crises, for example. On a humanitarian front, Level One Project, an initiative of the Bill and Melinda Gates Foundation, looks to use blockchain technology to “create an internet of payments for the world’s poorest” to benefit the two billion people without access to bank accounts. Recently, though, some researchers have started looking outside the world of finance and imagining blockchain becoming a pervasive force in everyday life.

Will Blockchain Be Foundational?

Transactions and contracts are fundamental parts of life outside of economic systems. Records are also particularly useful for activities such as proving individual identity and citizenship or verifying a college degree or high school diploma. Blockchain advocates see the agencies and organizations that manage these records as falling behind the times. To them, blockchain ledgers are the silver bullet that will hopefully remove these organizations altogether, eliminating bureaucracy, costs and inefficiencies.

While it’s more fun to think about fast-paced disruptive technology “breaking” the current system, blockchain would probably be a foundational technology that slowly falls into place. In a January 2017 Harvard Business Review article, Marco Iansiti and Karim Lakhani compare blockchain to the development of TCP/IP, another foundational technology. Essentially, TCP/IP began its life in the early 1970s as a single-use technology, facilitating e-mail between researchers on internet precursor ARPAnet at the U.S. Department of Defense. TCP/IP was a brilliant improvement over the prevailing practice of circuit switching, but the telecom industry viewed it skeptically for over a decade. The technology gradually caught on in small localized networks, and with the advent of the World Wide Web in the mid-1990s, TCP/IP became a pivotal part of the digital revolution. From humble beginnings, TCP/IP took 30 years to mature and grow into a transformative technology.

Blockchain may follow a similar path on a similar timeframe. The concept was introduced in October 2008, meaning blockchain is less than a decade old. Like TCP/IP, it is widely used in a small community early in its lifetime, and it may drastically reduce the costs behind transactions and contracts, much like TCP/IP did for connectivity. In fact, many businesses are independently using blockchain technology for internal transactions and recordkeeping, much like the early small TCP/IP networks.

A major issue confronting a decentralized record system like blockchain and bitcoin is that of trust. In an ideal blockchain environment, a ledger’s validity is verified by the ledger itself, because all transactions are immutably recorded and security issues are minimized. Blockchain advocates often speak of the merits of this “trustless” system, but it’s not usually that simple.

In an intriguing paper published on November 29, financial services firm Cornerstone Capital Group posited that widespread use of blockchain would likely shift trust to other stakeholders rather than reduce or eliminate it altogether. The report uses the example of renewable energy certificate trading, an activity well-suited to blockchain efficiency. Figure 1 shows a current trading system, in which trust exists between the generator, broker and buyer and is validated by an auditor or regulator. Figure 2 shows an idealized trading system as imagined by blockchain advocates: the trust now exists solely between the trading parties because blockchain transactions occur directly between two parties, only when those parties have assets prepared, and transactions cannot be changed or modified after agreement. 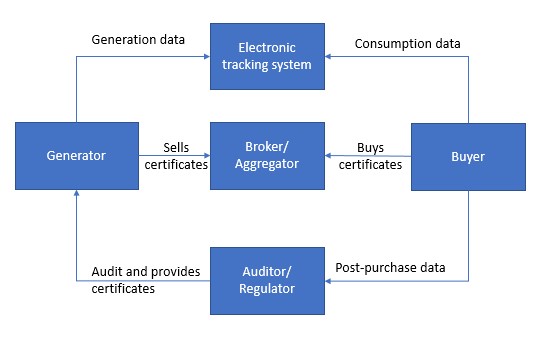 Yet, report authors Emma Currier and Sebastian Vanderzeil believe this system ignores major variables like a regulator to ensure that the generator is reliable or an outside source for price negotiation and reference. They propose that a blockchain system would look more like Figure 3: the burden of trust still exists, but it has been shifted to agencies outside the blockchain system. This hybrid system still eliminates regulatory inefficiencies, but it is not quite as streamlined as a pure blockchain system. 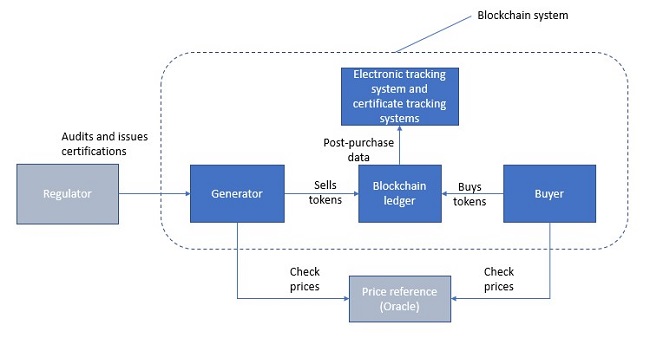 Still Over the Horizon

With bitcoin and blockchain just starting to take off, these issues are speculative at best. If blockchain does develop to a point where it’s widely used across industries, however, it could revolutionize security and efficiency for contracts, transactions and recordkeeping.