3D printing is being used to create everything from concrete housing structures that people will actually live in, to autonomous boats to ease congestion, to maybe even rocket fuel in the future and much more.

Now, engineers at MIT have created soft, 3D-printed structures, controlled through the wave of a magnet, that could one day be used in biomedicine to clear a blockage, extract tissue samples, deliver drugs to a specific location or take images inside the body.

MIT created a number of structures that could be magnetically manipulated including a smooth ring that wrinkles up, a long tube that squeezes shut, a sheet that folds itself and a grabber that can crawl, roll, jump and snap together. 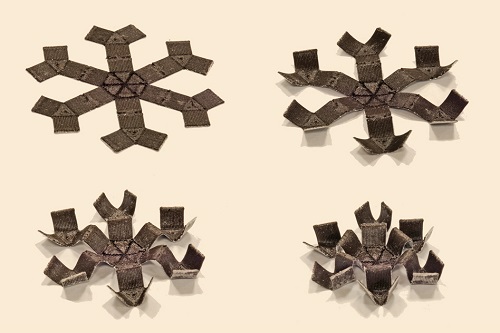 Some of the structures created by MIT using 3D printing. Source: MITThe team fabricated each structure with a new type of 3D-printable ink infused with tiny magnetic particles. Then they fitted an electromagnet around the nozzle of a 3D printer, which caused the magnetic particles to swing into a single orientation as the ink was fed through the nozzle. Controlling the magnetic orientation of individual sections in the structure, researchers were able to produce structures and devices that can instantly shift into intricate formations or move in response to an external magnetic field.

This type of technology is called a soft actuated device, such as a hydrogel device that swells when the temperature or pH changes. Other types of these devices include shape-memory polymers and liquid crystal elastomers that deform when stimulated by heat or light. MIT said these types of soft actuated devices are often slow to respond, changing shape in a few minutes or even hours. While others require pumps or high voltages.

“There is no ideal candidate for a soft robot that can perform in an enclosed space like a human body, where you’d want to carry out certain tasks untethered,” said Yoonho Kim, a researcher at MIT. “That’s why we think there’s great promise in this idea of magnetic actuation because it is fast, forceful, body-benign and can be remotely controlled.”

With the new 3D printing method, researchers can print sections, or domains, of a structure and tune the orientation of magnetic particles in a particular domain by changing the direction of the electromagnet encircling the printer’s nozzle, as the domain is printed.

Researchers also developed a physical model that predicts how a printed structure will deform under a magnetic field, which helped the team carry out a number of different printed structures.

Other devices MIT developed included a set of “auxetic” structures that rapidly shrink or expand along two directions. They also printed a ring embedded with electrical circuits and red and green LED lights to illuminate in a programmed manner.

The full research can be found in the journal Nature.