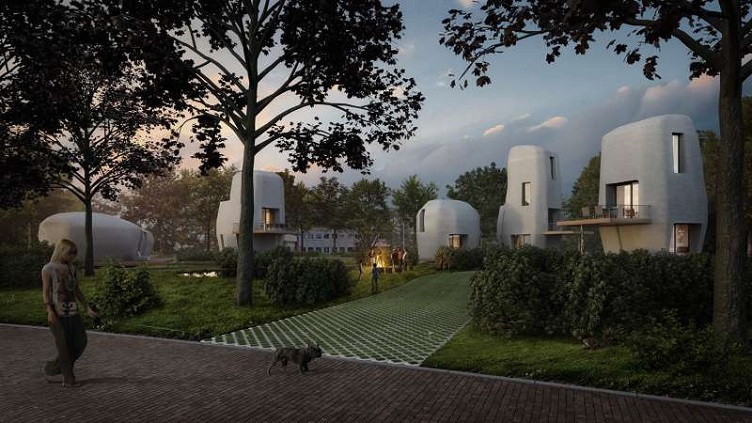 The first house will be a one story structure with the four other concrete houses being multi-stories. Source: Eindhoven University of Technology

The city of Eindhoven, Netherlands, is embarking on a new project to build the first of five planned 3D printed concrete houses that will all be occupied by homeowners.

The housing is part of Eindhoven’s city expansion in the area of Meerhoven over the next five years. The first house will be a single-floor dwelling that will be ready for occupation in the first half of 2019. The other four houses will be multi-story buildings.

The concrete structures will be subject to all the regular building regulations and will meet the demands of current-day occupants concerning comfort, layout, quality and pricing.

The house will be based on erratic blocks in a green landscape, the irregular shape of the buildings is due to one of the key aspects of 3D printing — the ability to construct any shape. The five houses will be built consecutively with new research on concrete 3D printing being applied in the next house. Eindhoven University will print the first house on its concrete printer with the intention to gradually shift the building to a construction site. The last house will be fully realized at the construction site including the concrete printing.

Eindhoven has become a hub for concrete 3D printing with last year’s building of the first 3D-printed concrete bridge in the city.

The University of Eindhoven said concrete 3D printing is a game changer for the building industry due to the ability to construct almost any shape while having the ability to print in different qualities and colors of concrete in a single build. At the same time, 3D printing is done quickly with much less concrete needed, which reduces CO2 emissions from cement production.