MIT physicists developed a method to boost the conversion of heat into electricity of thermoelectric materials. The theoretical model ensures an efficiency five times larger than standard conversion potential and produces twice as much energy. 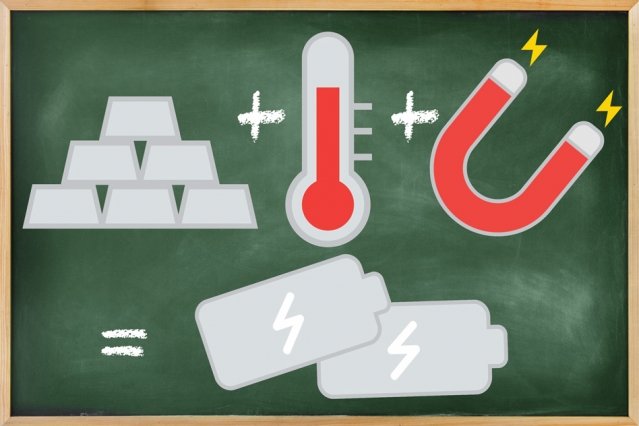 “If everything works out to our wildest dreams, then suddenly, a lot of things that right now are too inefficient to do will become more efficient,” said lead researcher Brian Skinner, a postdoc in MIT’s Research Laboratory of Electronics. “You might see in people’s cars little thermoelectric recoverers that take that waste heat your car engine is putting off, and use it to recharge the battery. Or these devices may be put around power plants so that heat that was formerly wasted by your nuclear reactor or coal power plant now gets recovered and put into the electric grid.”

Thermoelectric materials produce energy from heat by a simple natural process: when one side of the material is heated electrons are ejected and move to the cold side. This movement of electrons creates a voltage. For many decades scientists have been studying many materials with the hope to improve the voltage produced by the heat, to no avail.

In order for electrons to dislodge from atoms, enough heat (energy) must be supplied so they acquire enough energy to cross the band gap of the material. This is a difficult process. Now, however, the MIT researchers discovered a theoretical method to increase the electron current by looking into a special type of materials called topological semimetals, a new type of materials mainly synthesized in the lab.

Skinner and the team, however, did not give up. They used an old research result made by scientists at Princeton University during an unrelated experiment to find a solution. The Princeton team subjected semiconductor materials to a strong magnetic field and found that the trajectory of the electron flow is bent. The MIT physicists decide to try the same approach. They designed a model where the topological material is heated under a very strong magnetic field (30 Tesla), and they found what they were looking for.

“We eventually figured out that under a strong magnetic field, a funny thing happens, where you could make electrons and holes move in opposite directions,” Skinner said. “Electrons go toward the cold side, and holes toward the hot side. They work together and, in principle, you could get a bigger and bigger voltage out of the same material just by making the magnetic field stronger.”

They filed a patent for their new thermoelectric method and are collaborating with Princeton researchers to test the theory.