Virtual reality (VR) is not just about gaming – the technology is finding an increasing number of applications in just about every sector, including product design, education and the military. And nowhere are the benefits of VR greater than in healthcare.

The use of VR and 3D-visualization technology in medicine isn’t exactly new. Medical researchers have been exploring ways to create 3D models of patients’ internal organs using VR since the 1990s. But advances in 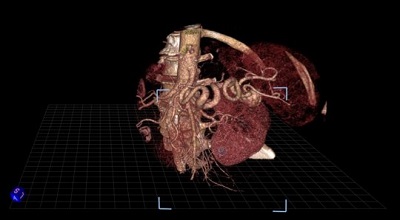 An image of a splenic artery aneurysm as it is seen in virtual reality. Source: Society of Interventional Radiologycomputing power have made simulated images much more realistic, and faster to generate.

Psychologists have applied VR for the treatment of post-traumatic stress disorder. Stroke doctors, pain specialists, surgeons and other medical practitioners have found their own uses for VR. In some cases, medical VR involves the familiar headsets; in others, 3D glasses and special video screens give a VR-like experience.

X-rays, CT scans, and MRI scans can now quickly be converted into high-resolution 3D images. VR provides clinicians with the ability to show interventional radiologists their patient's internal anatomy as close to reality as possible without being invasive. Using VR can help doctors prepare and adjust their complicated techniques and treatments to fit exactly what the patient needs since no two treatments are the same. 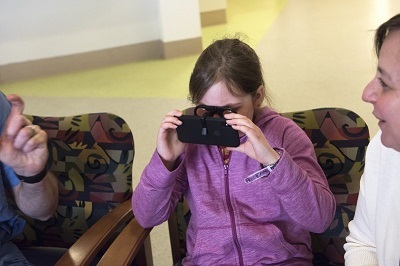 The communication gap between pediatric patients and their doctors may soon shrink with a new VR system designed to facilitate conversation between doctors and patients. Boston Children’s Hospital is teaming up with Klick Health to bring pediatric patients HealthVoyager™, a medical education and patient experience platform that uses VR to show patients their individual medical findings in an immersive 3D environment.

Scientists at the Imperial College London at St. Mary’s Hospital are using augmented reality through a Microsoft HoloLens headsets while operating on patients undergoing reconstructive lower limb surgery. The team used the technology to overlay images of CT scans onto each patient’s leg allowing surgeons to see through the limb during surgery.

Google researchers have developed a tool that combines augmented reality with a deep learning neural network to provide pathologists with help in spotting cancerous cells on slides under a microscope. The prototype Augmented Reality Microscope (ARM) platform consists of a modified light microscope that enables real-time image analysis and presentation of the results of machine learning algorithms directly into the field of view. The ARM can be retrofitted into existing light microscopes found in hospitals and clinics by using low-cost, readily available components, and without the need for whole slide digital versions of the tissue being analyzed.

For the first time in the history of medicine, cancer surgeons performed an operation using a VR camera at the Royal London Hospital. Everyone could participate in the operation in real time through the Medical Realities website and the VR in OR app. Anyone anywhere could follow through two 360 degree cameras how the surgeon removed cancerous tissue from the patient.

VR can even make you feel old. Embodied Labs created “We Are Alfred” by using VR technology to show young medical students what aging means. Everyone can be the hypothetical Alfred for seven minutes, and experience how it feels to live as a 74-year-old man with audio-visual impairments.