Imaging human brain function with techniques such as magnetoencephalography (MEG) typically requires a subject to perform tasks while their head remains still within a restrictive scanner. This artificial environment makes the technique inaccessible to many people and limits the experimental questions that can be addressed.

A MEG system that can be worn like a helmet, allowing free and natural movement during scanning, was devised as a solution by researchers from the University of Nottingham and the Wellcome Trust Centre for Human Neuroimaging, University College London. The new scanner is expected to improve research and treatment for children with epilepsy, patients with neurodegenerative disorders such as Parkinson’s disease and others who can’t use traditional fixed MEG scanners. 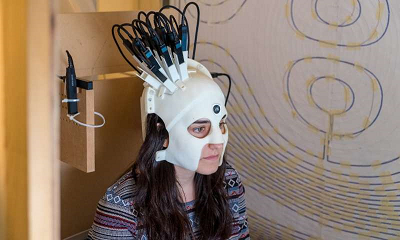 The brain scanner can be worn like a helmet, allowing patients to move naturally while being scanned. Source: Wellcome Trust Centre for Human Neuroimaging

Brain cells operate and communicate by producing electrical currents. These currents generate tiny magnetic fields that are detected outside the head. Researchers use MEG to map brain function by measuring these magnetic fields. This allows for a millisecond-by-millisecond picture of which parts of the brain are engaged when we undertake different tasks, such as speaking or moving.

Current MEG scanners weigh around half a ton because the sensors used to measure the brain’s magnetic field need to be kept very cold (-269°C) which requires bulky cooling technology. The patient must remain very still, as even a 5-mm movement can make the images unusable.

The new scanner eliminates these limitations with scaled-down technology and incorporation of new quantum sensors that can be mounted in a 3D-printed prototype helmet. The lightweight sensors can operate at room temperature, enabling placement directly onto the scalp surface. Positioning the sensors much closer to the brain increases the amount of signal that they can pick up.

Subjects can also move their heads during the scanning. However, the quantum sensors will only operate in this way when the Earth’s magnetic field has been reduced by a factor of around 50,000. To solve this problem, special electromagnetic coils were developed to reduce the Earth’s field around the scanner. These coils were designed specifically to sit either side of the subject, and close to the walls of the room, to ensure that the scanner environment is not claustrophobic.

The researchers predict this type of scanner will provide a four-fold increase in sensitivity in adults, potentially increasing to 15- or 20-fold with infants.