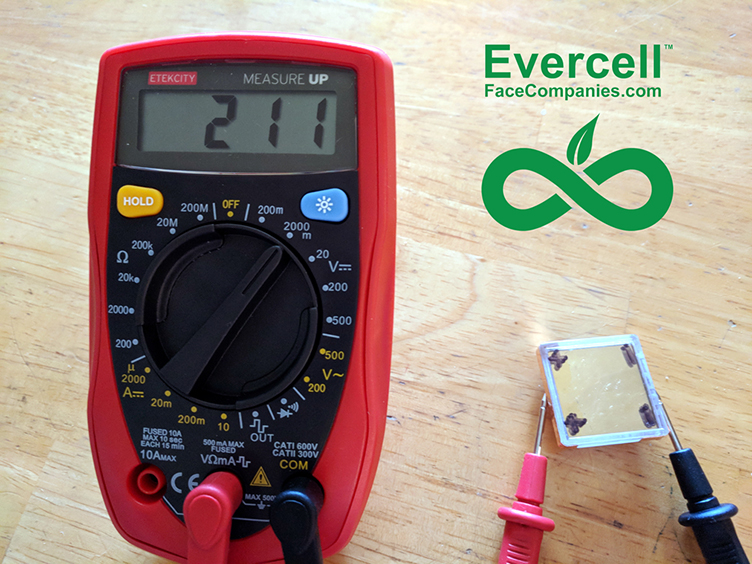 This Evercell thermal harvester demonstration unit produces a constant output of about 200mV; scaling up to deliver an output of 1.2Vdc is planned for production units. Source: The Face Companies.

We reported recently on the development of the Evercell power cell, a thermal energy-harvesting technology capable of powering wireless internet of things (IoT) sensors without batteries.

The technology, one of the Evergreen technologies from The Face Companies, was discussed at APEC 2018, the Applied Power Electronics Conference, which ran March 4-8 in San Antonio, Texas. The conference gave us an opportunity to learn a little more about how Evercell works.

The basic design of the energy-harvesting (EH) element is a passive solid-state structure encompassing thin layers in the range of tens to hundreds of nanometers thick. Donor and receptor electrodes sandwich a dielectric layer less than 200-nm thick. A surface treatment layer is used to diminish the work function of the donor electrode, typically to a range of 1.0 eV or less. The receptor electrode, by contrast, is formed of a material to have a work function typically in the range of 2.0 eV or greater. This facilitates electron migration, while the proximity of the layers themselves promotes a quantum tunneling effect.

EH elements can be stacked and electrically interconnected within the power cell device to scale down the packaged area, scale up the power — or both. Typical sensor applications would employ power cells comprised of stacks of 50-100 EH elements.

The design generates electric potential without the need for exposure to a disturbing or radiating power source, and without the need to overcome an energy-expending budget. Evercell can work as an energy collector and accumulator in virtually any operating environment above absolute zero. Potential applications include smart watches, wireless medical sensors and IoT sensor nodes and embedded environment sensors.