NASA Developed Tool is Searching for Life Beyond Earth

NASA has developed an innovative new spectroscopy instrument to aid the search for aliens. This new instrument is designed to detect compounds and minerals associated with biological activity quickly and with greater sensitivity than previous instruments have allowed. While there has been no reported evidence of life outside of Earth yet, but looking for evidence of present or past life on other planets is still an important part of the NASA Planetary Exploration Program. 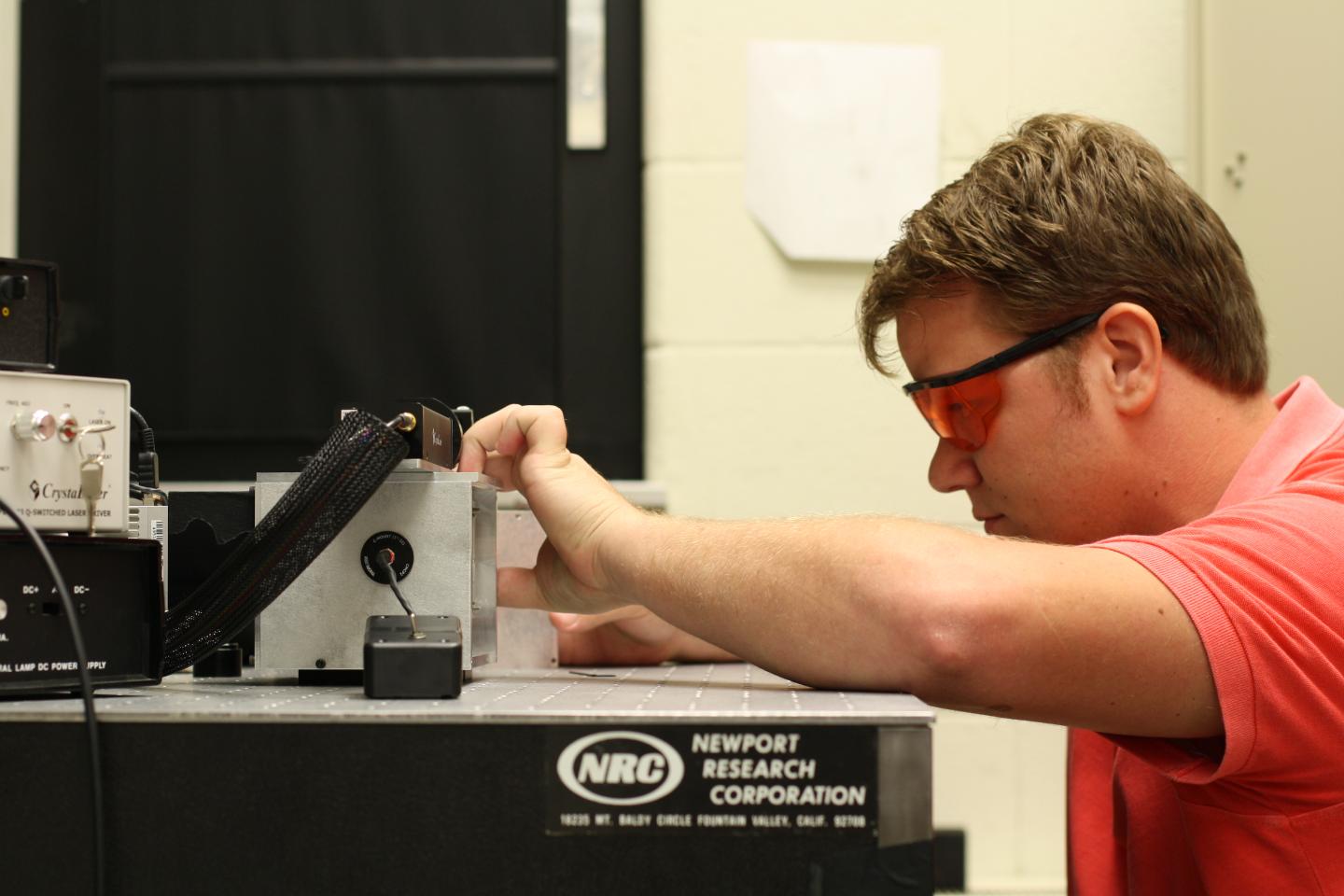 Researchers from NASA Langley Research Center and the University of Hawaii developed a new micro Raman spectroscopy instrument to search for life on the surface of other planets. Looking for evidence of life on other planets continues to be an important part of the NASA Planetary Exploration Program. Pictured is Derek Davis, a student from Old Dominion University, working on the instrument. (Source: M. Nurul Abedin, NASA Langley Research Center)

Researchers at NASA Langley Research Center and the University of Hawaii developed the new instrument that improves on an analytical technique known as micro Raman spectroscopy. The technique uses the interaction between laser light and a sample to provide chemical composition information on a microscopic scale. It can detect organic compounds, like the amino acids found in living things, and identify materials formed by biochemical processes on Earth that might indicate that there is life on other planets.

"Our instrument is one of the most advanced Raman spectrometers ever developed," said M. Nurul Abedin of NASA Langley Research Center, who led the research team. "It overcomes some of the key limitations of traditional micro Raman instruments and is designed to serve as an ideal instrument for future missions that use rovers or landers to explore the surface of Mars or Jupiter's icy Europa moon."

The researchers call their new systems the standoff ultra-compact micro Raman (SUCR) instrument. It is the first device to perform micro-Raman analysis of samples 10 centimeters away from the instrument with 17.3-micron resolution. The new spectrometer is significantly faster than any other micro Raman instruments and extremely compact. The features are important for space applications and could make the instrument useful for real-time biomedical and food analyses.

"Micro Raman spectroscopy is being explored for detecting skin cancer without a biopsy and can be used to for food analysis applications such as measuring caffeine in drinks," said Abedin. "Our system could be used for these applications and others to provide fast chemical analysis that doesn't require sending samples off to a laboratory."

Size and weight are important factors when designing the SUCR instrument for space exploration.

"We had to make sure the instrument was very small and light so that it could travel aboard a small, fuel-efficient spaceship that would make the nine-month journey to Mars or the six-year journey to Europa," said Abedin. "The instrument must also work with other instruments aboard a rover or lander and be unaffected by the harsh radiation conditions found on other planets."

The new instrument offers several important improvements to previous micro Raman spectroscopy instruments, which require samples to be collected before analysis and measurements to take place in the dark. Traditional micro Raman instruments are also prone to interference from natural mineral fluorescence.

"The limitations of current systems would significantly lower the number of samples and amount of information that could be gained from a mission to Mars, for example," said Abedin. "We carefully designed the optics of our system to enable fast analysis under daylight conditions and to produce a strong Raman signal that isn't as prone to interference as traditional systems."

In order to create the SUCR instrument, the researchers modified a collection of optics from a previously developed system in order to acquire spectra of samples that are closer to the instrument. This has further reduced the system’s footprint by using a miniaturized spectrometer that is 16.5 centimeters long, 11.4 centimeters wide and 12.7 centimeters tall.

Passing light from a compact pulsed laser through a cylindrical lens with a focal length of 100 millimeters has allowed researchers to achieve 17.3-micron resolution for analysis of samples that are only 10 centimeters away. They have also demonstrated 10-micron resolution for sample 6 centimeters away using a cylindrical lens with a 60-millimeter focal length.

In lab tests, the researchers used the SUCR instrument to successfully measure Raman spectra from samples 10 centimeters away with an analysis area of 17.3 microns by 5 millimeters. In-room light on conditions, they used SUCR to analyze minerals and organic compounds that might be associated with life on other plants, including sulfur, naphthalene, mixed samples, marble, water, calcite minerals and amino acids.

"We are now trying to increase the analysis area by using scanning," said Abedin. "Because of the speed of our system, we think it will be possible to create a Raman map of area 5 by 5 millimeters in only one minute. Doing this with a traditional micro Raman system would take several days."

The next step for the researchers is to test the SUCR instrument in environments that mimic the ones found on Mars and other planets. They will then begin the validation process to show how the device would operate accurately under space conditions.

The paper on this research was published in Applied Optics.