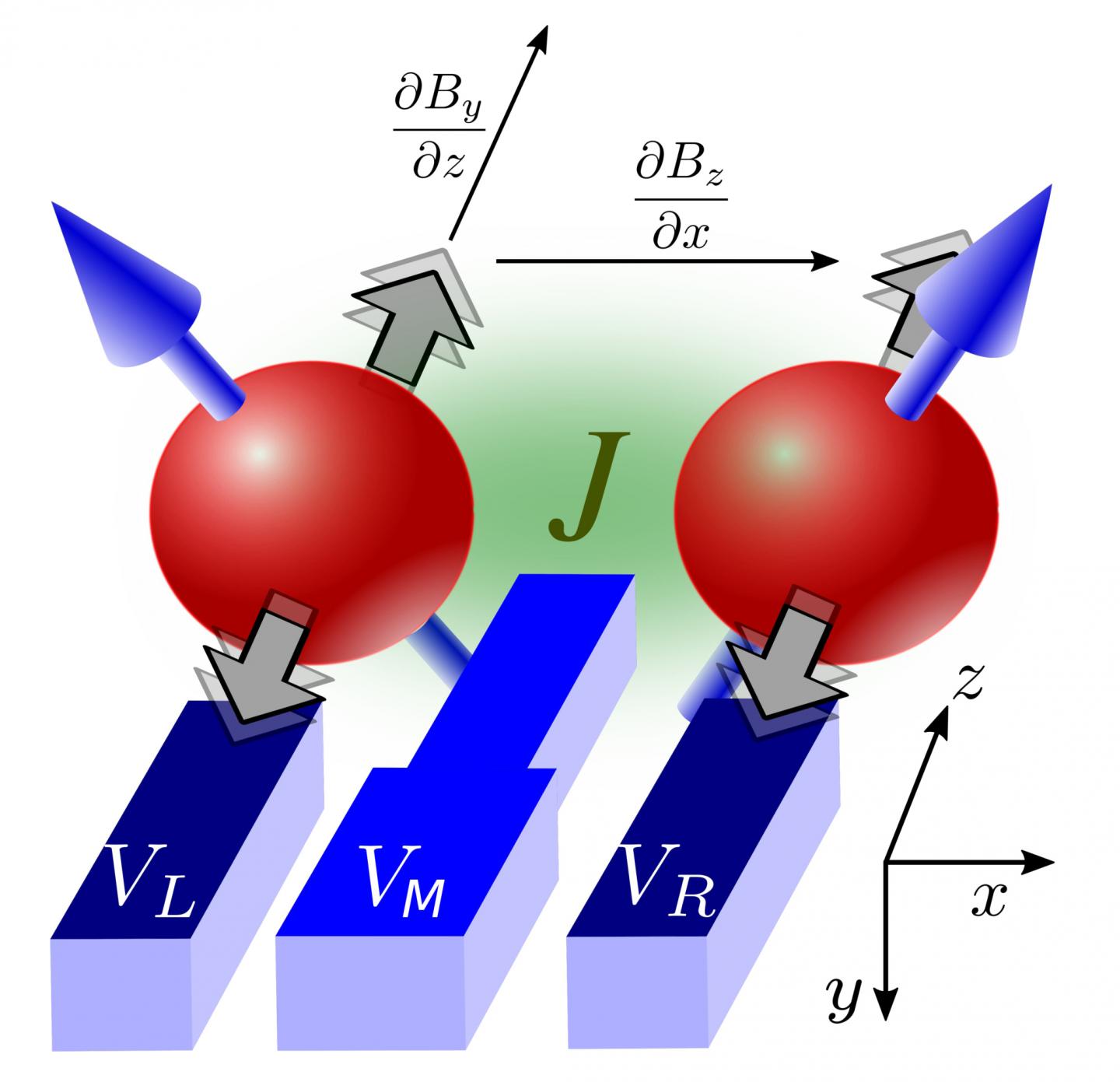 A primary goal is to create stable “quantum gates”—the basic building block for a quantum computer. Scientists from the University of Konstanz, Princeton University and the University of Maryland now succeeded in creating stable quantum gates for two-quantum bit systems. Their quantum gate uses individual electrons in silicon to store the information “quantum bit” and they can precisely control and read out the interaction of two quantum bits. This experiment includes all necessary basic operations of the quantum computer.

Like a classical digital computer uses the “bit” with the values of either zero or one as the basic unit for all the calculation processes, a quantum computer needs a basic storage unit, the quantum bit. The difference is that the quantum bit is not limited to two states, but can exist in multiple states at once and is therefore much more complex in its implementation than a simple digital system.

Researchers have come up with a few ideas for technically realizing a quantum bit, for example using ions or superconducting systems. The researchers have used the electron spin, the intrinsic angular momentum of a single electron in the semiconductor material silicon as the basis of quantum bits. The electron’s direction of rotation corresponds to the zero and one value of the digital bit, but in its exact quantum state, the electron is able to hold more information than just a simple zero or one.

A first achievement of the researchers was to extract a single electron from the billions of atoms of a silicon piece.

"That was an extraordinary achievement by our colleagues from Princeton", says physicist Professor Guido Burkard, who coordinated the theoretical research in Konstanz.

The researchers use a combination of electromagnetic attraction and repulsion to separate a single electron from the electron bunch. The separated electrons are then lined up precisely and each is embedded in a kind of “hollow” where they are held in a floating state.

The next goal was to develop a system to control the angular momentum of individual electrons. Konstanz physicists Guido Burkard and Maximilian Russ have developed this new method: a nano-electrode is applied to each electron and using a magnetic field gradient, the physicists can create a position-dependent magnetic field that the electrons can be individually accessed with and enables the researchers to control the angular momentum of the electrons. This way they have created stable one-quantum bit systems to store and read out information in the form of electron spins.

One quantum bit is not enough to generate the basic switching system of the quantum computer. To do this, two quantum bits are required. The crucial step the Konstanz researchers took towards two-quantum bit system was to link the states of two electrons. This link makes it possible to construct basal switching systems with which all basic operations of the quantum computer can be performed. For example, the system can be programmed in a way that an electron rotates only when its adjacent electron has a spin in a predetermined direction.

The researchers from Konstanz had to create a stable system to link the spins of two individual electrons.

"That was the most important and difficult part of our work," says Guido Burkard, who designed and planned the method together with team member Maximilian Russ.

They developed a switching system that coordinates the angular momentum of two electrons in inter-dependence. An additional nano-electrode is placed between the two “hollows” in which the silicon electrons are floating. The electrode controls the coupling between the two electron spins. With this method, the physicists have realized a stable and functional basic processing unit of a quantum computer. Fidelities for single quantum bits are above 99 percent and about 80 percent for two interacting quantum bits - significantly more stable and more accurate than in previous attempts.

The base material of the quantum gate is silicon. A magnetically very silent material with only a low number of own nuclear spins, Guido Burkard summarizes.

It is important that the atomic nuclei of the chosen material don’t have too many spins, intrinsic angular momentum, which could interfere with the quantum bits. Silicon, with a share of around 5 percent, has an extremely low spin activity of its atomic nuclei and is, therefore, a particularly suitable material. Another advantage is that silicon is the standard material of semiconductor technology and accordingly well researched. The scientists can benefit from many years of experience with this material.

A paper on this research was published in Science.