Engineers at the University of California San Diego have developed a smartphone case and app that could make it easier for patients to record and track their blood glucose readings at home and on the go.

Currently, checking blood sugar levels can be a hassle for people with diabetes, especially when they have to carry their glucose monitoring kits around with them every time they leave the house. 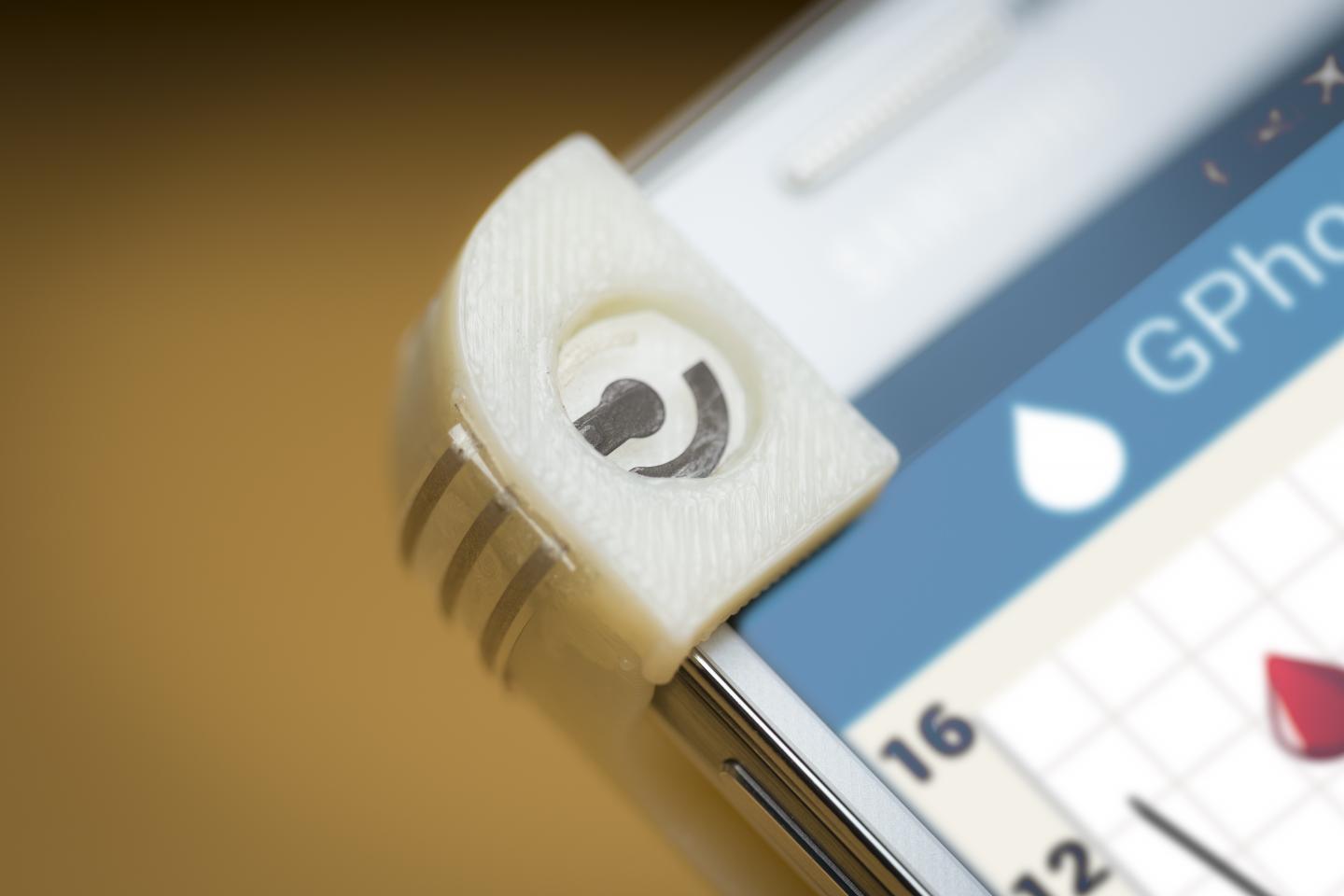 This is a GPhone: a portable glucose sensing system integrated onto a smartphone. (David Baillot/UC San Diego Jacobs School of Engineering)

"Integrating blood glucose sensing into a smartphone would eliminate the need for patients to carry a separate device," said Patrick Mercier, a professor of electrical and computer engineering at UC San Diego. "An added benefit is the ability to autonomously store, process and send blood glucose readings from the phone to a care provider or cloud service."

The device is called GPhone, and it is a new proof of concept portable glucose sensing system. It was developed by Mercier, nanoengineering Professor Joseph Wang and their colleagues at the UC San Diego Jacobs School of Engineering. Wang and Mercier are the director and co-director of the Center for Wearable Sensors at UC San Diego.

GPhone has two main parts. One is a slim, 3D-printed case that fits over a smartphone and has a permanent, reusable sensor in one corner. The second part of the case consists of small, one-time use, enzyme-packed pellets that magnetically attach to the sensor. The pellets are housed inside a 3D-printed stylus that is attached to the side of the smartphone case.

To run a test, the user first takes the stylus and dispenses a pellet onto the sensor, activating the sensor. The user would then drop a blood sample on top. The sensor measures the blood glucose concentration, then wirelessly transmits the data through Bluetooth to a custom-designed Android app that displays the numbers on the smartphone screen. The test takes about 20 seconds. When the test is finished, the used pellet is discarded, deactivating the sensor until the next test. The stylus holds enough pellets for 30 tests before it needs to be refilled. A printed circuit board enables the whole system to run off of a smartphone battery.

The pellets contain an enzyme called glucose oxidase that reacts with glucose. The reaction generates an electrical signal that can be measured by the sensor’s electrodes. The greater the signal, the higher the glucose concentration. The team tested the system on different solutions of known glucose concentrations. The results remained accurate through multiple tests.

A key part of the design is the reusable sensors. In previous sensors the team developed, the enzymes were permanently built on top of the electrodes. The problem was that the enzymes wore out after several uses. The sensor would no longer work and had to be completely replaced. Keeping the enzymes in separate pellets resolved this issue.

"This system is versatile and can be easily modified to detect other substances for use in healthcare, environmental and defense applications," Wang said.

The system stores a lot of data so the users can track their readings over long periods of time. But there is a trade-off in price. While the reusable glucose sensor and 3D parts are inexpensive, refill pellets may be more costly than the test strips in today’s glucose monitoring kits.

The team envisions one day integrating glucose sensing directly into a smartphone rather than a case. The work is currently in the proof-of-concept stage. The next steps include testing on actual blood samples and minimizing sample volumes. The current prototype uses at least a dozen drops of sample per test so the researchers want to cut that down to an amount that is normally extracted from a finger prick. They also plan to include a function in the app that sends alerts reminding users to check their blood sugar.

The paper on this research was published in Biosensors and Bioelectronics