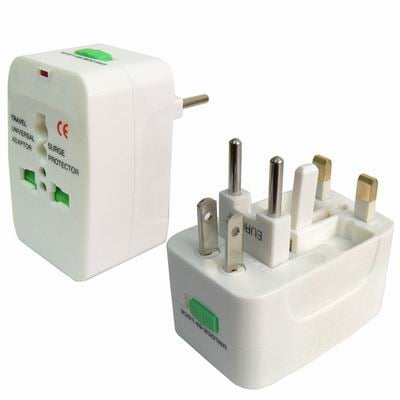 AC Power Adapter; Source: Shop Extreme/CC BY 2.0If you have ever traveled internationally, you may have found yourself requiring a power adapter to convert from 120V to 230V or vice versa. But have you ever wondered why the U.S. and a few other countries use 120V while most of the world uses 230V? Perhaps a better question is, how did the U.S. end up with a 120V alternating current (AC) standard?

Technically, the U.S., Canada, Mexico and other countries that use 120V are actually on a 240V distribution system. All residential and commercial power in the U.S. is provided with two 120V conductors and one neutral conductor. When the load is applied from one 120V lead to the neutral you get 120V. However, when you apply the load from one 120V lead to the other 120V lead the voltage is combined to produce 240V. This is the power used for residential kitchen ovens, clothes dryers, water heaters and larger power tools and appliances.

If most countries use 230V +/- (220V - 240V) distribution systems, why do some countries have 120V power outlets while others use 230V? The answer can be traced back to Thomas Edison and his light bulb invention. 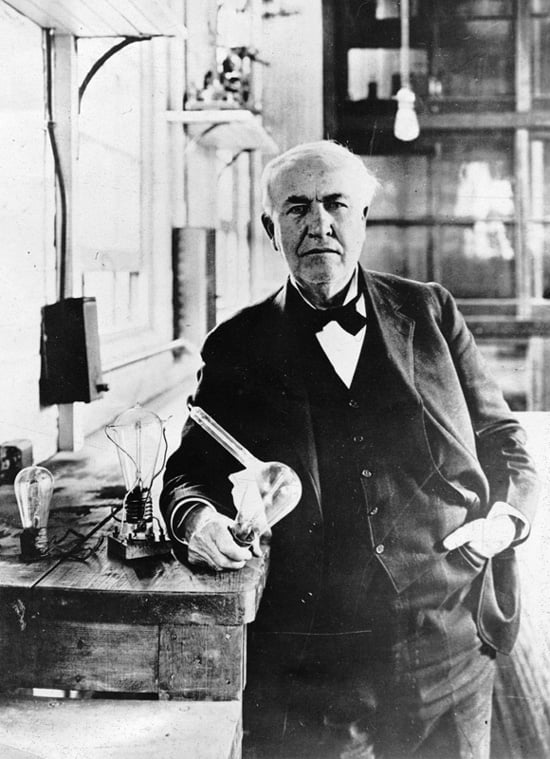 Thomas EdisonEdison’s first successful incandescent light bulb was tested on October 22, 1879, and used a coiled carbon filament that was connected to platina contact wires. The bulb only lasted 13.5 hours but was encouraging enough for Edison to continue to improve his design, eventually discovering a carbonized bamboo filament that could last more than 1,200 hours. Edison knew that for the bulb to be practical for mass production it would need to have high resistance and run on relatively low voltage, which ended up being 110V direct current (DC).

Edison founded the Edison Electric Light Company in 1878 and demonstrated his new light bulb on December 31, 1879. The first commercial installation for the new incandescent light system came in 1880 on the steamship Columbia. The Columbia continued to use Edison’s system until 1895.

Edison realized that achieving his dream of making electricity cheap and available to the masses required more than just a light bulb—it needed an electric distribution system. He founded the Edison Illuminating Company in 1880 to compete with gas light utilities. The utility was located on Pearl Street in New York City and began supplying 110V DC to 59 customers in September 1882.

Thomas Edison’s main rival was the Serbian-American genius, Nikola Tesla. In the early 1880s, Tesla worked for the Continental Edison Company, installing an electric power utility for incandescent lighting systems in Paris. Tesla’s knowledge in electrical engineering impressed his management, and he relocated to the U.S. with his manager, Charles Batchelor, to work at the Edison Machine Works in Manhattan. 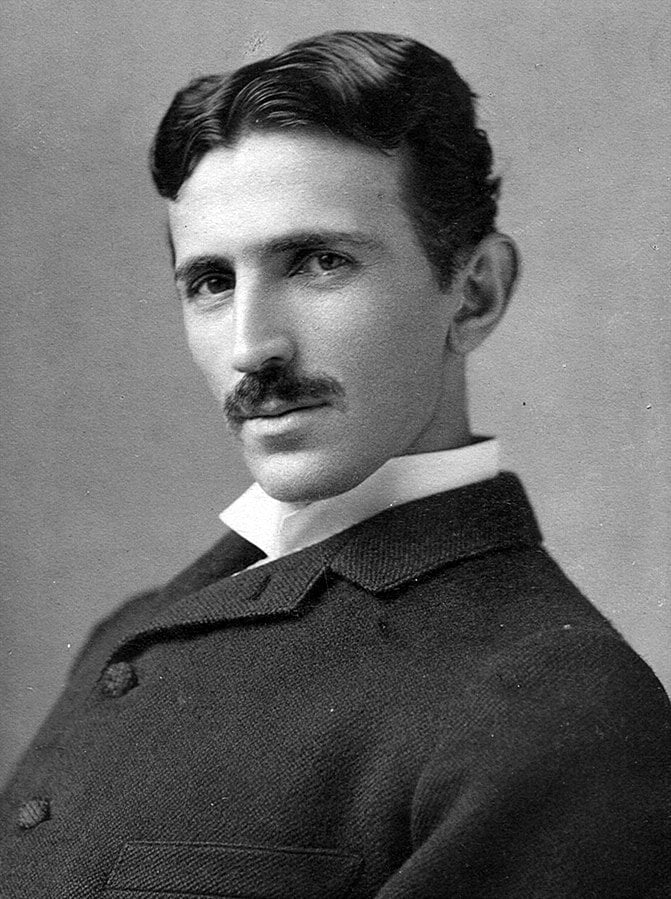 Edison Machine Works was a manufacturing company created by Thomas Edison to produce dynamos (electric generators used to produce direct current) and large electric motors. Tesla’s employment at Edison Machine Works lasted only six months before he resigned. Tesla felt he was owed bonuses that were never paid. He was also disillusioned after work he performed to redesign generators for an arc lighting system to power street lights was scrapped.

After leaving Edison Machine Works, Tesla began working on a patent for an arc lighting system. Arc lighting produces light by means of an electric arc. The invention, by Humphrey Davy, dates to the early 1800s and starting in the 1870s became the most popular system for street lighting until eventually being supplanted by incandescent lights after the turn of the century. Arc lighting required higher voltages to operate than Edison’s incandescent system produced.

While Edison was promoting 110V direct current, Tesla was a believer and pioneer in the three-phase alternating current electric power system. Tesla created a new company, Tesla Electric Light & Manufacturing, in 1885 to create an arc lighting and manufacturing company. Shortly after the utility was running, Tesla’s investors abandoned the manufacturing part of the business in favor of a new utility-only operation. Tesla lost everything, including patents.

After struggling and working low-wage jobs for more than a year, Tesla secured investors and founded the Tesla Electric Company in April 1887. The new company focused on improving and developing new electric motors and generators, including the invention of an induction motor that ran on alternating current. AC power systems were becoming popular in Europe and parts of the U.S. at this time due to their advantages of long-distance, high-voltage power transmission compared to DC systems.

George Westinghouse, the founder of the Westinghouse Electric & Manufacturing Company, was looking for a motor to run on his company’s AC power system. Westinghouse hired Tesla as a consultant for one year, paying him the large sum of $2,000 per month (the equivalent of about $50,000 today). During this time, Tesla worked in Pittsburgh, helping to install an AC power system to power streetcars. Westinghouse engineers and Tesla mutually agreed on a current of 60 Hz, which was the frequency Tesla’s induction motor ran on. Unfortunately, Tesla’s induction motor could only run at constant speeds, so it would not work for the streetcar application, but the 60 Hz current standard had been set. 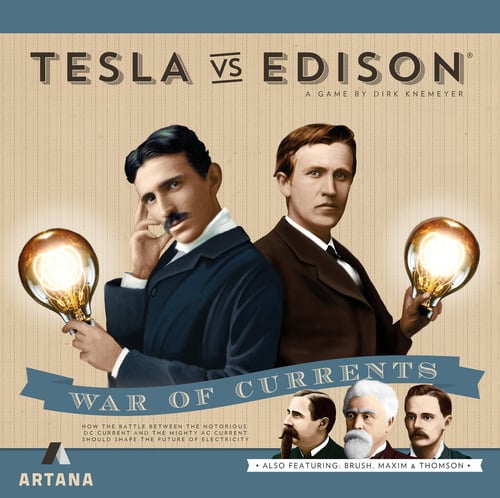 War of Currents Board Game; Source: BoardGameGeekThe late 1880s saw the onset of what was coined the “War of Currents” between the DC-based Edison Electric Light Company and AC-based Westinghouse Electric & Manufacturing Company. Edison claimed that alternating current was more dangerous than his safer 110V direct current systems. This claim was exacerbated by a series of deaths caused by high-voltage AC power lines between 1888 and 1889, including Western Union lineman John Feeks, who was electrocuted on October 11, 1889, while working on what were supposed to be low voltage telegraph lines.

The electric chair means of execution also got pulled into the War of Currents. Originally conceived by Buffalo dentist Alfred P. Southwick in 1881, it was first used for execution in 1890. Before its first use, there was much debate on what voltage should be used and whether alternating current power could be used effectively. A committee was formed in 1888 to make a recommendation. Tests had only been done on dogs and small animals and committee members were skeptical about using AC power. 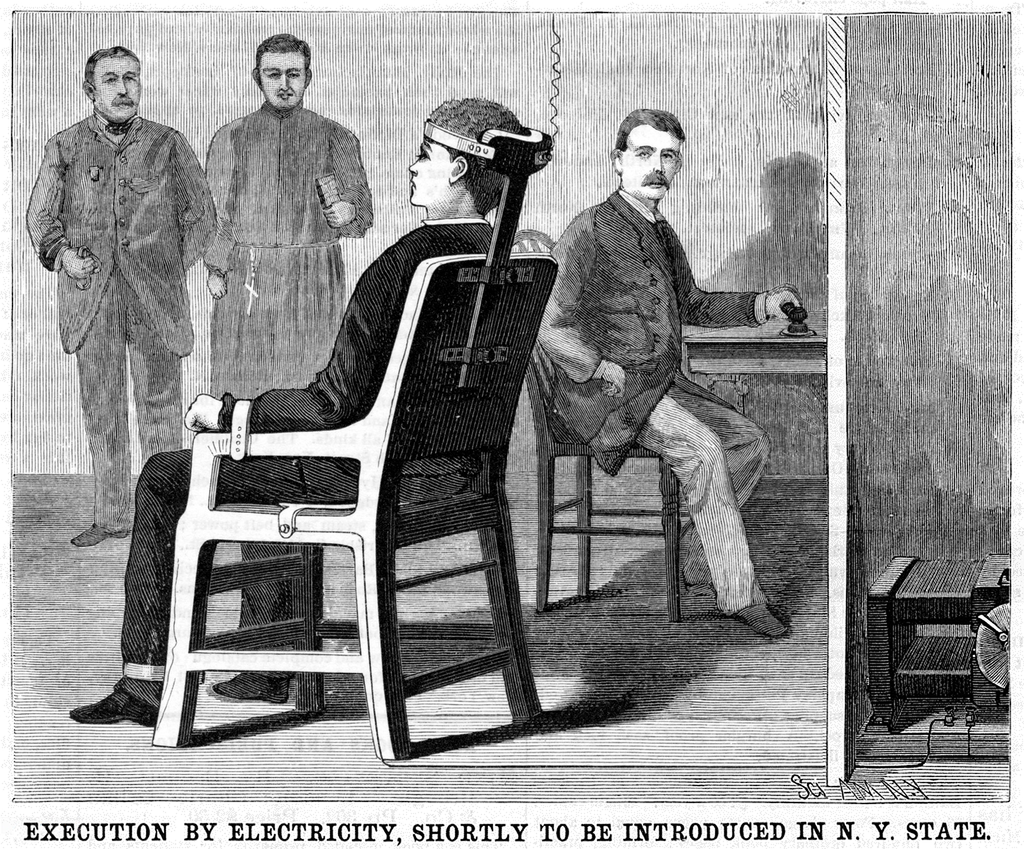 A consultant named Harold P. Brown was named to conduct some additional tests. Brown was an opponent of AC power due to the recent power line deaths. Working with Thomas Edison, Brown conducted electrocution experiments on larger animals, including four calves and a horse using 750V AC power. As a result of these tests, the committee recommended using 1000V AC, which was approximately half the voltage used for high-voltage power lines. This led to the phrase "electrocutioner's current" for alternating current by its opponents. George Westinghouse accused these tests as being self-serving on the part of Brown and accused him of being under the influence of Edison.

In 1883, before the War of Currents began, Thomas Edison had been seeking a method to allow his DC power systems to reach a wider radius of customers and save on transmission costs. He patented a three-wire distribution system that connected two 110V conductors with a neutral conductor, to form 220V. The alternating circuit companies adopted this practice during the War of the Currents to allow 110V distribution to incandescent lighting systems and 220V to major appliances. 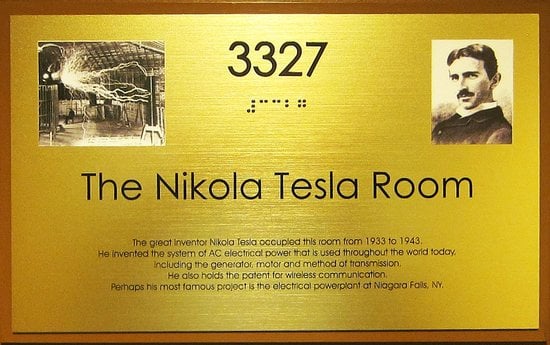 Europe was lagging behind the United States, which led to the adoption of higher-voltage standards. Metal filament lamps capable of running at higher voltages were developed near the beginning of the 20th century. This breakthrough led Germany to switch to the 220V system to increase its distribution capacity. The 220V system spread to the rest of Europe, increasing to the current standard of 230V. Germany decided on 50 Hz, which is how the world ended up with two standard currents, 50 Hz and 60 Hz to go along with the two main voltages.

For a complete breakdown by country, see this list on the World Standards website. A full list of plug and socket types can be found here as well.