A group of Russian scientists have developed a secure quantum communication system capable of transmitting single-photon quantum signals across distances over 155 miles.

ITMO University scientists, based in Saint Petersburg, aware that IT is an important issue for large companies, small businesses and individual users alike, wanted to improve current data encryption algorithms used to protect our data. The logic behind these algorithms can oftentimes be cracked, despite the complexity.

That’s when the team from the Quantum Information Centre of the International Institute of Photonics and Optical Information Technology at ITMO University along with colleagues from Heriot-Watt University in Edinburgh devised a new way to effectively generate and distribute quantum bits.

"To transmit quantum signals, we use the so-called side frequencies," said Artur Gleim, head of the Quantum Information Centre at ITMO University, "This unique approach gives us a number of advantages, such as considerable simplification of the device architecture and large pass-through capacity of the quantum channel. In terms of bit rate and operating distance our system is comparable to absolute champions in the field of quantum communications." 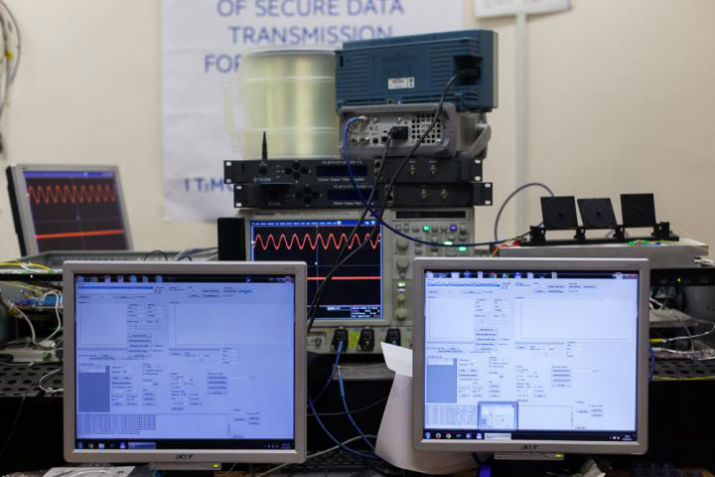 Experimental device of quantum cryptography system. (Image Credit: ITMO University) This is the first-of-its-kind system in Russia, which according to the researchers can even compete with the best existing analogues.

The system hinges on the possibility of stable transmission of quantum signals through fiber optical channels.

Their work reveals that by using the laws of quantum physics, data transmission can become completely immune to future hacks. Information in a quantum channel is carried by single photons that change irreversibly once an attacker attempts to intercept them, so the real users will know about the attack instantly.

In order to convert the quantum bits in the system, the team needed to direct laser radiation into a device called an electro-optical phase modulator. Inside the modulator, the wave emitted by the laser is split into several waves. Once the signal is transmitted through the cable, the same splitting occurs on the receiver end. Depending on the relative phase shift of the waves generated by the sender and the receiver, the waves will either enhance or cancel each other. The pattern created by the overlapping wave phases is converted into the combination of binary digits, 1 and 0, which serves to compile a quantum key.

"All waves undergo random changes while passing through the fiber," said Oleg Bannik, one of the authors of the study and researcher at Quantum Information Centre, "But these changes are always identical and get smoothed over during the additional run through the receiver's modulator. In the end, the receiver observes the same combination as the sender."

Now the researchers intend to create a complete quantum cryptographic system, which will generate and distribute quantum keys and relay useful data at the same time.