Build Your Own Muon Detector

A DIY sensor for detecting muons — short-lived particles produced by cosmic ray interactions with matter — has been designed by MIT researchers. The pocket-sized device can be assembled with common electrical parts at a cost of about $100.

The detector was designed with students in mind, and the research team launched an outreach program called CosmicWatch and an associated website that lists parts to purchase and detailed instructions on how to assemble, calibrate and run the detector. An average high school student should spend about four hours building a detector for the first time, and just one hour building it a second time.

The portable sensors can be used to measure muon rates in virtually any environment. The team has helped 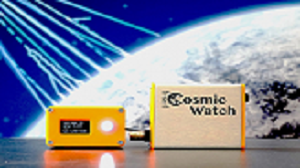 The relatively simple device costs just $100 to build. Source: MITsupply nearly 100 detectors to high school and college students, who have sent the instruments up in planes and weather balloons to measure muon rates at high altitudes. The device is also useful for measuring muons underground.

The original intent was to build a small, handheld muon detector as a miniature add-on to IceCube, a huge particle detector encased in ice, deep underground at the South Pole. IceCube is designed to detect subatomic particles called neutrinos. A small device might be inserted into PINGU (Precision IceCube Next Generation Upgrade), a proposed array that would increase the detector's sensitivity to low-energy neutrinos. Small muon detectors, buried in such an array, would be able to tag the precise position of muons, enabling scientists to sift out those particles in their search for neutrinos.

While most lab-scale muon detectors are composed of large, bulky photomultipliers and even larger batteries to power them, the researchers sought a more compact design. The requisite components were scavenged from discarded electronics equipment at MIT and used to build a small detector. Simple electronics and software components to display the number of muons passing through the detector were also engineered, making the detector a self-contained measurement and readout instrument.

The kits include a piece of plastic scintillator, a SensL silicon photomultiplier, an Arduino Nano, a readout screen, a custom-designed printed circuit board and a 3D-printed casing.

The researchers would like to apply their pocket detector as a means of muon tomography, a technique that uses the distribution of muons to create a 3D image of the amount of material surrounding a detector. Scientists in the past have used muon tomography instruments, much like X-rays or CT scans, to uncover geological structures, the most famous of which was an effort in the 1960s to search for hidden chambers in the Pyramid of Chephren, in Giza.

The researchers have published the first version of the detector design in the American Journal of Physics.