New Ingestible Sensor Can Detect Movement in the GI Tract 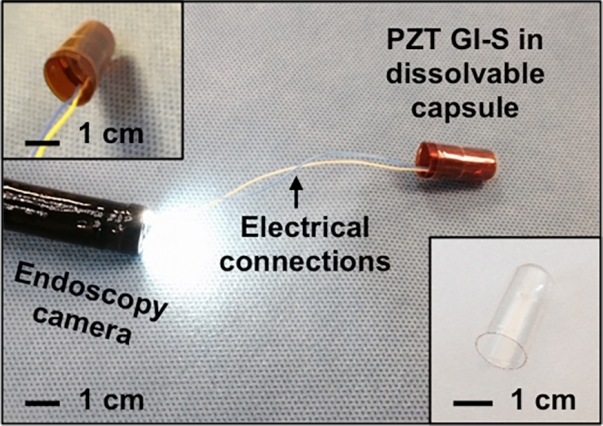 This type of sensor could make it easier to diagnose digestive disorders that impair motility of the digestive tract, which can result in difficulty swallowing, nausea, gas or constipation. Source: Conformable Decoders, MIT Media Lab

Researchers from MIT and Brigham and Women’s Hospital have built a flexible sensor that can be rolled up and swallowed. When it is ingested, the sensor attaches to the stomach wall or intestinal lining, where it can measure the rhythmic contractions of the digestive tract.

These sensors could help doctors diagnose gastrointestinal disorders that slow down the passage of food through the digestive tract. They could be used to detect food pressing on the stomach, which would help doctors monitor food intake in patients who are being treated for obesity.

The flexible devices are based on piezoelectric materials, which generate a current and voltage when they are mechanically deformed. They also incorporate polymers with an elasticity that is similar to human skin, so they can conform to the skin and stretch when the skin stretches.

The researchers demonstrated that the sensor remains active in the stomachs of pigs for up to two days. The flexibility of the device could offer improved safety over more rigid ingestible devices, according to the researchers.

“Having flexibility has the potential to in part significantly improve safety, simply because it makes it easier to transit through the GI tract,” says Giovanni Traverso. Traverso is a research affiliate at MIT’s Koch Institute for Integrative Cancer Research, a gastroenterologist and biomedical engineer at Brigham and Women’s Hospital, and an author of the study.

Canan Dagdeviren, assistant professor in MIT’s Media Lab and director of the Conformable Decoders research group, is the lead author. Robert Langer, a David H. Koch Institute Professor and a member of the Koch Institute, is also an author of the paper.

Traverso and his colleagues previously developed ingestible devices that can be used to monitor vital signs or deliver drugs to the digestive tract. With a goal of developing a more flexible sensor that might offer improved safety, Traverso worked with Dagdeviren. Dagdeviren has previously developed flexible electronic devices, like a wearable blood pressure sensor and flexible mechanical energy harvesters.

In order to make the new sensor, Dagdeviren first fabricates electronics circuits on a silicon wafer. The circuits contain two electrodes: a gold electrode placed atop a piezoelectric material called PZT, a platinum electrode on the underside of the PZT. When the circuit is fabricated, it can be removed from the silicon wafer and printed onto a flexible polymer called polyimide.

The ingestible sensors that the researchers designed for this study is 2 by 2.5 centimeters and can be rolled up and placed in a capsule that dissolves after being swallowed.

In the testing of pigs, the sensors successfully adhered to the stomach lining after they were ingested. Through the external cables, the sensors transmitted information about how much voltage the piezoelectric sensor generated. The researchers could then calculate how much the stomach wall was moving as well as if food or liquid was ingested.

“For the first time, we showed that a flexible, piezoelectric device can stay in the stomach up to two days without any electrical or mechanical degradation,” Dagdeviren says.

This type of sensor could make it easier to diagnose digestive disorders that impair motility of the digestive tract, which can result in difficulty swallowing, nausea, gas or constipation.

“Having a window into what an individual is actually ingesting at home is helpful because sometimes it’s difficult for patients to really benchmark themselves and know how much is being consumed,” Traverso says.

In the future, researchers plan to harvest some of the energy generated by the piezoelectric material to power other features, including additional sensors and wireless transmitters. These devices would not require batteries that would further improve their potential safety.