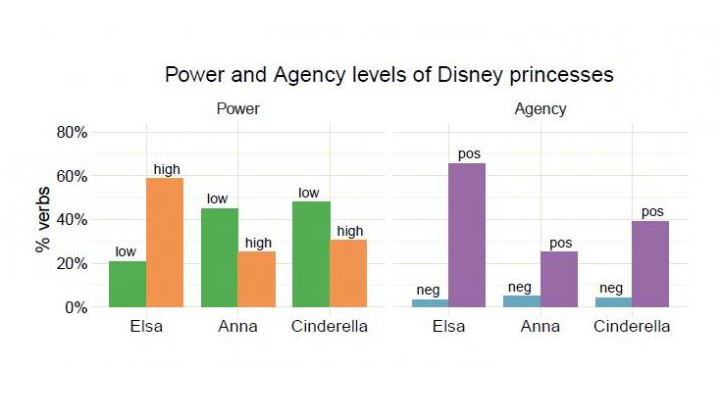 Only one of the two female protagonists in "Frozen" is portrayed with high power and positive agency, according to a new analysis. Image credit: University of Washington.

Computer scientists at the University of Washington have used artificial intelligence to quantify gender-based power imbalances in Hollywood movies.

One example is “Frozen.” It appears to have two strong female protagonists -- Elsa, the elder princess with powers over snow and ice, and Anna, her sister who spends much of the film on a quest to save their kingdom.

"'Frozen' is an interesting example because Elsa really does make her own decisions and is able to drive her own destiny forward,” observed doctoral student Maarten Sap, lead author of a paper on the research. “Anna consistently fails in trying to rescue her sister, and often needs the help of a man.”

More of their findings:

The team’s work was recently presented at the 2017 Conference on Empirical Methods in Natural Language Processing (EMNLP) in Denmark. Their tool offers a much more nuanced analysis of gender bias in fictional works than the Bechdel Test, which evaluates only whether at least two female characters have a conversation about something other than a man.

Next steps for the researchers include broadening the tool to not only identify gender bias, but also to correct for it -- by offering rephrasing suggestions or ways to make language more equal. The methodology could be applied to any text, including books and plays.

"We developed this tool to help people understand how they may be perpetuating these subtle but prevalent biases that are deeply integrated in our language," said senior author Yejin Choi, an associate professor at the university’s Paul G. Allen School of Computer Science & Engineering. “We believe it will help to have this diagnostic tool that can tell writers how much power they are implicitly giving to women versus men."