A group of researchers led by MIT Associate Professor Juejun Hu have developed a method to produce photonic devices that can bend and stretch without damage. These devices operate on light and can be used in diagnostic and monitoring systems, wearables and implantables, to mention a few applications. 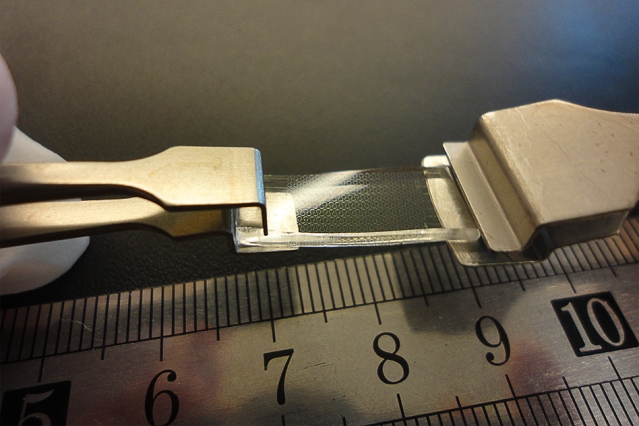 A new material produced by Juejun Hu and his team can be repeatedly stretched without losing its optical properties. Source: MIT

The method uses a special glass-type material called chalcogenide. Its finding was published in Light: Science and Applications.

Hu and researchers from more than a dozen universities, including the University of Central Florida, and several universities in France and China, say that many people are interested in the possibility of optical technologies that can stretch and bend, especially for applications such as skin-mounted monitoring devices that could directly sense optical signals. Such devices might, for example, simultaneously detect heart rate, blood oxygen levels and even blood pressure.

The novel approach comes from the fact that most current photonic devices are manufactured using rigid, hard materials on stiff substrates. Using soft materials to build these devices has the drawback that most have a poor refractive index, making them unsuitable to confine light beams.

So instead of using standard flexible materials, Hu and colleagues took a different approach. They formed the chalcogenide into a spring-like coil, similar to a spring made of steel that can be bent and stretched.

“You end up with something as flexible as rubber, that can bend and stretch, and still has a high refractive index and is very transparent,” Hu says.

The team tested the structure and found out that these spring-like configurations can undergo thousands of stretching cycles with no detectable degradation in their optical performance. They produced several photonic components, interconnected by the flexible, spring-like waveguides, all in an epoxy resin matrix, which was made stiffer near the optical components and more flexible around the waveguides. This finding is still in its infancy, given that Hu and his team have developed only single devices at a time, so far.

“For it to be useful, we have to demonstrate all the components integrated on a single device,” he says. “Work is ongoing to develop the technology to that point so that it could be commercially applied; this may take another two to three years.”

The team includes researchers from MIT (Professor Jing Kong, MIT postdocs Lan Li and Hongtao Lin), and Xiamen University and Chongqing University in China, Universite Paris-Sud in France, the University of Southampton in the U.K. and the University of Central Florida. The work was supported by the National Science Foundation and made use of the MIT Microsystems Technology Laboratories.