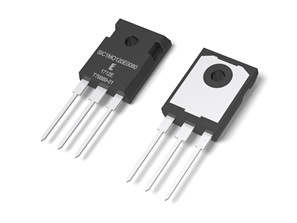 Source: Littelfuse, Inc.addition to the company’s growing power semiconductor line. In March, Littelfuse took another incremental step toward establishing industry leadership in the power semiconductor industry through a majority investment in the well-respected SiC technology development company, Monolith Semiconductor Inc. The LSIC1MO120E0080 Series, with a voltage rating of 1,200 V and ultra-low (80mΩ) on-resistance, are the first organically designed, developed and manufactured SiC MOSFETs to be released by this partnership. This device is optimized for high-frequency switching applications, providing a combination of ultra-low switching losses and ultra-fast switching speeds unavailable with traditional power transistor solutions.

The LSIC1MO120E0080 Series SiC MOSFET is available in TO-247-3L packaging and provided in tubes in quantities of 450.