One Standard To Rule Them All: USB Type-C Adds HDMI

As the title suggests, it’s expected that USB Type-C will become the sole data port for many future laptops and smart phones, but these USB-only devices will still have to interface to non-USB monitors or TVs.

The USB Type-C standards accommodate this reality by defining an Alternate Mode (AM) method of operation, which dynamically changes the function of pins in the USB Type-C connector to allow the use of non-USB data protocols. In September 2016, the HDMI Forum released their specification governing the AM operation of HDMI 1.4 in a USB Type-C environment.

Adding the ability to switch between USB and other high-speed formats in a single connector presents challenges to the designer, including switching between pin functions, providing protection from external transients such as ESD, and maintaining signal quality.

This article explores the various standards that came together to enable USB Type-C connectors to stream HDMI and other non-USB formats, and offers key design considerations for adding HDMI Alternate Mode capability to a USB Type-C interface.

Overview of the New USB Specifications

The latest set of USB standards has three parts. Although they are closely intertwined, they are released separately, and the design goals will dictate which specifications are supported by a particular USB implementation.

The USB Type-C specification can communicate with legacy USB 2.0 systems via the D+/D- and VBUS/GND pins. The pinout also includes pins for the new functions (including Alternate Mode) that are defined in the other two specifications. Figure 1 shows the standard and AM mappings for the Type-C connector.

HDMI 1.4 has six data channels operating at four different speeds. These channels are:

Figure 2 shows the standard HDMI Type-A connector. For AM use, an HDMI-to-USB cable maps the HDMI pins to the corresponding pins on the USB-C connector. 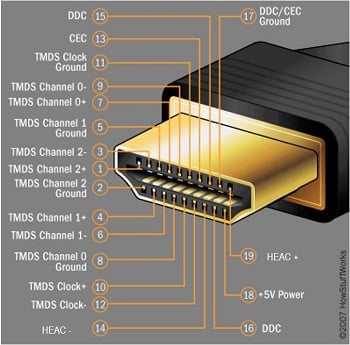 Figure 3 shows the new pin definitions of the USB Type-C connector in HDMI Alternate Mode. The implementation maps the three TMDS pairs and their clock signal to the eight USB TX/RX pins. The two SBU pins now carry the HEAC channel and the CC pin carries the low-speed CEC signal.

Note that the D+/D- pair is not affected by this transformation, so a USB 2.0 data channel can still operate in parallel with HDMI.

The USB PD specification defines the sequence of events needed to enter Alternate Mode. When the user connects an active Type-C cable between two USB PD-enabled ports, a series of negotiations (Figure 4) takes place over the CC line. The negotiations establish whether USB or Alternate Mode is to be used, and which AM standard applies: a specific set of vendor-defined messages (VDMs) identifies the standard to be used.

Figure 4: When a USB PD-capable port first recognizes the presence of another USB PD port, negotiations take place to determine the power delivery protocol and the data format to be used. (Image Source: Texas Instruments)

Although not needed for HDMI operation, the negotiation sequence also includes other USB PD functions such as the required power level and the direction of power flow.

Once the initialization sequence has established HDMI as the desired protocol, both ports remap their pins as needed, and HDMI AM operation begins.

What hardware components are needed to add HDMI to a USB Type-C port? Figure 5 shows a block diagram of a USB PD port with the Alternate Mode components highlighted.

Note that even if the application does not specify USB PD power levels, agreeing on the Alternate Mode requires negotiation over the CC line, so a USB PD PHY and PD manager must still be included. For more information on the other components, consult this useful resource.

There are two added parts: 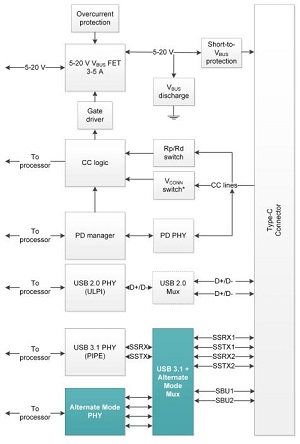 The HDMI AM specification is new, so chipsets designed specifically for this application are still in development. DisplayPort AM parts are readily available, though, and can be used with the addition of an HDMI format converter. 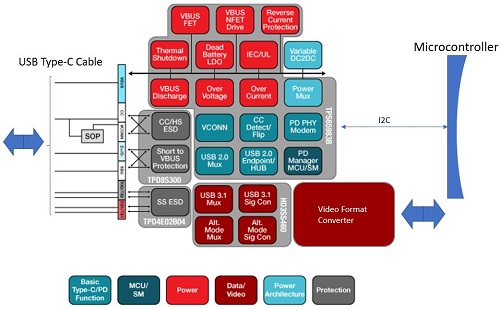 Two devices form the basis of the design:

The Texas Instruments’ HD3SS460 high-speed bi-directional passive 4-by-6 multiplexer/demultiplexer switches between AM and USB mode and accommodates connector flipping.

The final building block is a video converter to switch from DisplayPort to HDMI formats.

In addition to the main blocks discussed above, three items in particular deserve careful consideration: the first two protect components against electrical overstress, and the third boosts the overall system performance.

Because the USB port is connected to the outside world, the design must provide protection against potential ESD strikes when users insert or remove cables, but different ESD solutions are needed for different pins.

At gigabit data rates, the designer must take special precautions to maintain signal integrity. Any extra circuitry added to a high-speed data channel, such as an ESD protection device, must add minimal capacitance to the line; it must also maintain impedance matching throughout the signal path, since any mismatch can cause reflections that can increase jitter and reduce signal quality. Pins that carry lower-speed data, such as SBU and CC, are not as sensitive to added capacitance or impedance mismatch.

The eight TX/RX pins carry the high-speed data channels in both USB and HDMI modes: the USB 3.1 channels for USB operation, and the three TMDS channels plus clock for HDMI AM operation.

The ESD protection for lower-speed pins is included in another device, discussed in the next section.

Guard Against Shorts to VBUS

The pin pitch of the USB Type-C connector is only 0.5 mm. This increases the likelihood of a pin-to-pin short compared to the earlier Type-A connector. Pins adjacent to the VBUS pins—SBU and CC—are particularly at risk, especially if the USB/HDMI port supports the full USB PD specification as it allows VBUS pin to carry up to 22V. Not only could this sustained voltage appear on an adjacent pin in the event of a short, it could also give rise to a ringing voltage of up to 44V during a short-to-VBUS hot-plug insertion. 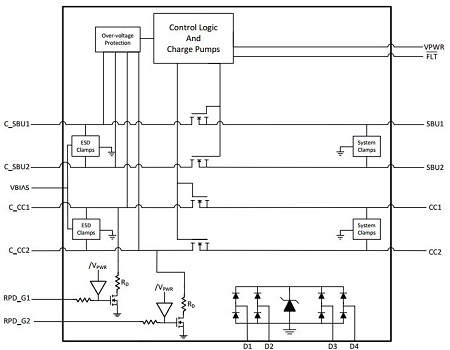 Texas Instruments’ TPD8S300 USB Port Protector (Figure 7) provides overvoltage protection against short-to-VBUS events on the CC and SBU pins, plus protection against voltage ringing. Although these and other pins aren’t as sensitive to added capacitance as the high-speed pins discussed earlier, they still need ESD protection. The TPD8S300 protects the SBU and CC pins, and also includes additional ESD protection for the two USB2.0 D+/D- pairs.

Adding components to protect against ESD and VBUS shorts has an effect on a high-speed HDMI or USB signal: despite the best efforts of the designer, the quality of the signal inevitably suffers as it propagates through the board. IC pin parasitics, PCB traces, and vias all play their part in degrading the signal before it reaches the output pin.

Including a redriver in the signal chain immediately before the Type-C connector is a cost-effective solution to maintain good signal quality at high data rates. A redriver boosts the signal output and includes linear equalization to compensate for channel losses. In a USB Type-C system it can help pass compliance tests and increase device interoperability when used with low-quality or extremely long cables. 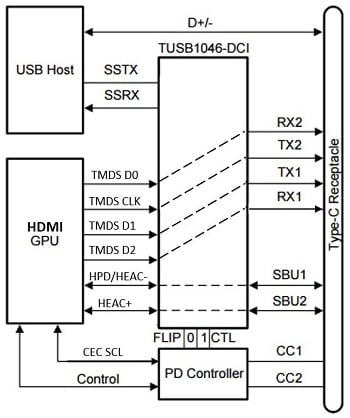 Texas Instruments’ TUSB1046 (Figure 8) combines the Alternate Mode multiplexer and redriver into a single device. The part contains a linear redriver that can support a data rate of up to 8.1Gbps per AM channel, more than enough for HDMI 1.4’s 3.4Gbps.

Although the TUSB1046 was originally designed for DisplayPort use, it is protocol-agnostic. Figure 8 shows the DisplayPort four-channel setting repurposed to three HDMI TMDS channels plus the TMDS clock.

Designers can expect to see other popular video standards join DisplayPort, Thunderbolt, MHL, and HDMI, jumping on the Alternate Mode bandwagon. The HDMI AM specification is new but only supports HDMI 1.4, a revision that dates back to 2009. HDMI 2.0 (2013) still uses three channels, but the 2017 revision, HDMI 2.1, adds a fourth TMDS channel. The HDMI Forum has not commented on when they might release an updated AM definition.

Since HDMI is such a popular standard, expect to see HDMI-specific Alternate Mode chipsets make their appearance soon. Regardless of the particular circuit blocks, though, many of the issues discussed in this article are fundamental engineering problems that must be solved for any system with similar performance.

USB Type-C, the latest revision of the popular standard, is becoming the standard for high-speed data communication in consumer devices such as laptops and smartphones. Taking advantage of USB’s Alternate Mode capability, HDMI is the latest high-speed data standard to issue a specification defining its use in a USB Type-C environment.

This article has discussed the new USB specifications that make this advance possible. Although designers are still waiting for a chipset optimized for HDMI, this article has reviewed the architecture of a practical approach using available parts and detailed some of the design considerations needed for a successful solution.